This whole digital thing has really crept up on us, hasn’t it? The world has been radically transformed under our noses and it’s hard to even grasp what is happening. I was recently reading two very different books, but they came together and led me to one more reason why I think travel is one of the best things you can do for yourself — and for the world.

One of the books was about a pressing issue of the day. The other was just for the pure pleasure of imagination. Theodore Dreiser’s Sister Carrie was published in 1900 and set in Chicago during that period. The book took me on a time machine ride back to the Turn of the Century, before automobiles and electricity, where the lights at night are gaslights, and if you called a taxi, it was a horse-drawn carriage.

As I toured the world of 1900 I had the historical hindsight to know what massive changes they were facing. I can only begin to imagine how strange it must have been for people of the 19th Century to confront to the vast changes of the 20th century as technologies profoundly transformed their world.

In the post-World War II America I grew up in, automobiles, television and assorted electrical devices were the given. But to my grandparents those things had arrived as novelties that had gone on to transform their world, and perhaps to push them into obsolescence.

Now my generation finds itself in a world that must be as radically different for us as our world was to our grandparents. Though we are caught up in these changes, it’s still difficult to understand them. 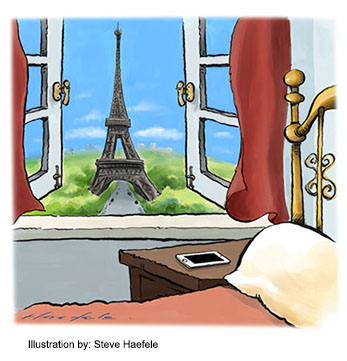 At this same time I noticed a crop of stories on Google News about a mental health crisis among teenagers that has worsened alarmingly since the early 2000s. The articles referred to an “epidemic” in teen depression and suicide, and it linked these trends to social media.

Because of my own concern with these issues I got hold of a recent book called Digital Minimalism by Cal Newport. It helped me to understand how the changes in digital technology are affecting people and gave some ideas for how to adapt to the brave new digital world we find ourselves in.

The book is subtitled “On living better with less technology” and it starts with the premise that many of us today are exhausted by the rush of online information and the amount of energy and time we are putting into digital media. It looks at digital media as a behavioral addiction, and makes a convincing case for it.

Nobody saw this coming. Nobody. Even Steve Jobs, the legendary visionary of digital technology, had only the vaguest inkling of the significance of the iPhone. Even he had no idea how the technology would interact with other developments taking place concurrently, such as social media.

When Jobs introduced the iPhone on June 29, 2007, he called it “the best iPod we have made…” He didn’t even mention its online capabilities until 33 minutes into his presentation.

Andy Grignon of the iPhone development team told Newport that “This was supposed to be an iPod that made phone calls. Our core mission was playing music and making phone calls.” Grignon said Jobs was “initially dismissive of the idea that it could become a general purpose mobile computer running a variety of different third party applications.”

But unknown to Apple, the iPhone was about to collide and interact synergistically with another development taking place at the same time.

Facebook’s originator Mark Zuckerberg, brilliant as he was, also backed into this future. Neither Facebook nor Apple knew what the other was doing and how those technologies would interact to change the social landscape of America.

Zuckerberg started Facebook in 2004 for Harvard students, opened it to other colleges and by Sept. 26, 2006, it was open to everyone. But the “like” function was not added till 2009. That’s when the company started consciously engineering the product to hook users.

When the “like” notifications first appeared in blue to match the design theme of Facebook, they didn’t get much attention. When the company changed them to red, to designate alarm, the use increased dramatically.

Facebook used two principles of behavior to drive usage. One is the principle of intermittent rewards. Michael Zeiler’s 1970s experiments with pecking pigeons showed vividly that rewards delivered intermittently are more enticing than those in a predictable pattern. Facebook’s engineers combined that principle with the basic human need for social acceptance to turn Facebook into a behavioral addiction.

Sean Parker, Facebook’s founding president, said that the thought process behind the development of these apps was “how do we consume as much of your time and conscious attention as possible?”

The other online giants emulated Facebook and used the same principles to capture markets and sell user information to their advertisers. As dotcom millionaire Seth Godin put it, “You are not the user, you are the product.”

The more time you spend online, the more advertisements you can be exposed to. These operations are designed to hook you. Tristan Harris, former startup founder and engineer of Google, told Anderson Cooper that “This thing is a slot machine.”

One problem with this business model is that negative emotions generate more engagement than positive ones. So social media tend to drift toward the negative. And as the various platforms of social media compete to pull you into their worlds, the result is often exhaustion.

Many of us feel that we are spending more time at the screen than is healthy, but for right now we just want to check for that one more message. As with any addiction, it’s always just that one more fix.

It helps to understand how these technologies succeed in monopolizing the space between your ears, but it’s also true that they confer great benefits. Now families and friends spread across the world have the means to keep in touch on an easy, daily basis. There is no doubt that these digital technologies can enhance people’s lives. But how can we take the benefits without being drained by them?

Newport recommends devising a “digital strategy.” You can’t go back to the non-digital world, even if you wanted to. But you also can’t just drift along with whatever breeze hits you, adopting each new platform: Facebook, Twitter, Instagram, Linked In, SnapChat, etc. etc. etc. You have to make some rules, create a plan. How much can you sustain? You need to choose what digital media will enhance your life and drop some of the others.

And then you have to follow through. That’s not so easy. Our phones and computers are ever present. We must be engaged with them to some extent. And as soon as you get online, some popup will entice you away from what you were thinking to something else, and then something else. And before you know it, an hour has slipped away.

My favorite way to break my digital addiction and re-engage with the real world is to take a trip. There is no better way that I have seen. As powerful as social media is, the tiny screen cannot prevail against a great tour through Rome or Paris, or an encounter with the natural beauty of a place like Yellowstone or Machu Picchu.

You can leave your phone in the hotel room, and if you are thoroughly engaged, you won’t miss it. And that can be the beginning of a new life, or the recovery of a lost one.