“We are the world. The world is you and me.”

Most of the people I have known who work in the travel industry are fueled by a deep-seated belief that travel is good not just for oneself, but for the world.

That’s the kind of transcendent meaning that helps give a person the strength to get out of bed every morning and go fight the battle of earning a livelihood. It helps to believe that what you are doing has some value beyond just producing a weekly paycheck.

I believe they are right. Travel is good for the world. It promotes friendship, good will and understanding among the peoples of the world. Friendly encounters between foreigners happen every day in millions of instances around the world. And all those events added together constitute a significant part of what makes the world what it is day by day.

Perhaps it is not as clear to those who have not discovered the joy of travel, but it doesn’t take long when traveling and encountering people in other countries to touch upon your common humanity, the basic human essence we all share.

When you realize your commonality with people in other countries it makes it hard to think of going to war against them. No one said it better than Mark Twain: “Travel is fatal to prejudice bigotry, and narrow-mindedness.”

I know from experience that travel expands your frame of reference. It jars you out of narrow-minded views and makes it hard not to feel some personal feelings of friendship or affection for people you may have previously seen as foreigners. 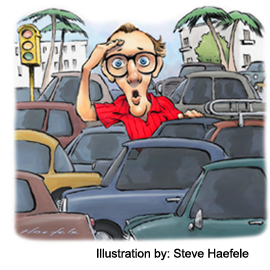 The same is true in reverse. When we visit a foreign country and treat people well, generate good feeling around our presence, then they will have that to draw on as part of how they think of your country. It really does promote understanding and world peace. It sounds so lofty and overblown, but I believe it is true.

There is no way to calculate the reverberations of your actions. We often hear stories of people whose lives changed course because of the kind attentions of one teacher or other kind soul. A single act of kindness can reverberate from person to person and spread far and wide.

This is going on around the world every day. Though it may not reach the headlines, it is one of the most important things happening in the world. When they say “love makes the world go round,” there is something to it.

It’s a mathematical certainty that for every cruel act we hear about on the news, there are millions of people just conducting their lives in their own spheres, getting along with their neighbors and taking care of their families. This is the rule. The news story is the aberration.

When we go to other countries and interact with people in the normal commerce and social interaction of tourism, we see that people in other countries have much in common with us. People of different languages, cultures and clothing styles have fundamentally the same basic needs as we have. The vast majority of people much prefer to live in peace than at war.

Every time you spread good will among people in a foreign country you are helping.

And it’s not just people who work in the travel industry who can legitimately feel that they are helping to further world peace. Individual travelers can also make a claim to this higher purpose when they travel.

When you travel you are a personal ambassador for your country. Whatever good will you generate between yourself and someone from another country, who may have previously seen you as an alien, you have spread some good in your corner of the world.

When we travel we are confronted by people not as a stereotypical portrayal, but as actual living, breathing human beings. It forces us to recognize our fundamental kinship with others. I have no doubt that travel has helped promote peace in the world and will continue to do so.

In today’s period of instant global communications and rapid international transportation we are closer to our neighbors around the world than ever before. It is more important than ever that we conduct ourselves as good ambassadors and representatives of our country when we travel abroad.

There was one trip I always remember for the way the experience shattered my stereotypes and helped me be a better ambassador.

I traveled to Egypt soon after a grisly terrorist attack had scared many people away. When I left home many people thought it was unsafe. Once I got there, however, it felt very comfortable. All the tourist sites had a visible presence of security officers and there was never any sense of danger. The Egyptian people were welcoming and especially grateful for our presence because their tourism businesses were suffering.

Then one afternoon in the giant metropolis of Cairo I got separated from my group and lost my way. I not only couldn’t read the street signs, I couldn’t even recognize the letters of the Arabic alphabet. I was like a helpless child, unable to speak the language to ask for help. I was sorely embarrassed that my group would be wondering what had happened to me and I would disrupt their day.

My anger at myself for being so stupid was my dominant emotion. I was vaguely aware that I was vulnerable to whoever or whatever might come. But I was too wrapped up in the foolishness of my situation to think of that. When I first realized I was lost, I was in a fury, wandering in circles trying to figure out where I was, marching right through the middle of the chaotic Egyptian traffic, oblivious to crowds of assorted vehicles. And people were letting me get away with it.

After many attempts to find someone who could speak English to ask directions to the hotel, I found myself headed in the right direction. Gradually I calmed down as I walked along many blocks of unpaved streets, past rows of concrete block buildings with open fronts and dirt floors. All this time I was walking through Cairo the thought of danger was at the back of my mind. At one point I found myself in a particularly seedy area and I wondered if I was still on the right track.

I needed to ask someone so I approached a young Egyptian man who was inhabiting one of these roadside hovels. The fear of danger flared up in the back of my mind as I approached this unknown man. How did I know he would not kill me? I was obviously out of my element with no protection. How did I know he would not trick me, lead me into an alley and kill me? But the moment our eyes met I found myself looking upon a very kind young man. There was no trace of malevolence of any kind. He pointed the way to the hotel. I felt ridiculous for my fears.

I realized at that moment that the Egyptians I was encountering were innocent compared to me. I had grown up seeing actors on television shooting each other every day. Back home violence was accepted as part of life. But this young man and other Egyptians I encountered knew nothing of that. If they had TVs at all, they had only very limited programming. They did not know of the violence that is so familiar in my world. They weren’t like the terrorists I had seen on TV at all. I could feel this just by being in their presence. Suddenly the tables were turned and I felt protective of him.

When I finally reached my hotel, I realized that not only had no one menaced me, no one had even made the slightest unkind or rude gesture toward me. Even as I was marching through the middle of traffic, people tolerated me. Perhaps they thought I was just another crazy Westerner come to visit Egypt.

I was not a good ambassador for my country that day. And yet, I can’t say I made waves either. The Egyptians had taken my presence in stride.

But what I experienced that day helped me to hopefully be a better ambassador in the future. I had been thrown out of my comfort zone in Egypt. I had encountered real Egyptians on their turf without any protection and I found I didn’t need any. I found that the most dangerous thing I encountered in Egypt was myself.

It was one of many experiences over the years that have shown me that people in other countries are, for the most part decent, kind people, just like back home.

I hope you meet some of them on your next trip.

Until next time, I bid you farewell and happy travels. 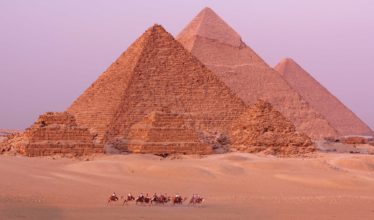 Egypt: Jewels of the Nile