Tours, Events and Other Parties

All I want is a congenial party. Ten minutes after leaving Newark, we shall be just one happy party, properly chaperoned, out for a real good time. I want no grouches or pessimists. There will always be from one to three cars in the party. The more the merrier…

– Arthur Tauck Sr., in a classified ad announcing the first Tauck tour in the Newark Evening News in 1925

A tour was never just a series of places on a map. In Arthur Tauck Sr.’s historic first classified ad for a tour of New England he used the word “party” three times in just a few sentences. He knew what he wanted.

Looking back today after the practice of tour operation has grown and spread into a large worldwide industry, it seems that Tauck had it right in that first description. It was the acorn that contained the DNA of all that a tour could be. It was, at its core, a party.

It was a party in motion, a caravan moving across the landscape, taking it all in, enjoying the discoveries with a group of friends. It’s an essential human activity, close to the heart of what it is to be human. From that first tour, Tauck was in the business of producing events. 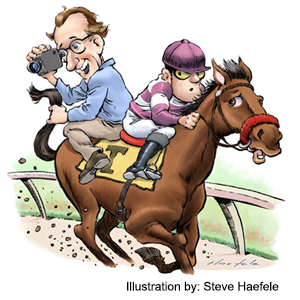 The Rise of the Great American Road Trip

This was 1925, when a rush of inventions from the early 20th century were transforming the landscape of American life. Thomas Edison’s electrical grid had opened the possibility of electric power to inventors, and they were coming up with myriad new electrically powered devices from vacuum cleaners to radios.

In the 1920s the automobile was just beginning to change forever the relationship of Americans to their environment. The automobile gave individual Americans a power to travel unlike anything anyone had ever seen.

These new technologies and new media of transportation opened new ways for human nature to express its age-old urges and aspirations. Human beings are nothing if not travelers. Throughout our biological history we have been restless migrants and explorers, wandering incessantly around the planet.

In the 1920s the automobile was unleashing the ancient urge to travel, and young Arthur Tauck saw the new potential.

Tauck was an inventor himself. The reason he had taken to the highway in the first place was to visit banks across the country to sell his invention, a coin tray that improved methods of counting and storing coins. It was while traveling those early highways that the possibility of taking people on tours revealed itself to him.

Just as Charles Darwin and Alfred Russel Wallace each came up independently with the theory of natural selection, there were other people besides Tauck who were making the same discoveries, seeing the same opportunities and inventing new ways for people to express their migratory impulses. Jack Collette started Collette Tours in Boston. Antonio Mantegazza started a tour company using boats on Lake Lugano, Switzerland, that would grow into Globus, one of today’s biggest touring companies. And there were many more.

They were inventors, but they were also discoverers. They were discovering how new technologies and media of transportation could enable the oldest longings of human nature.

What Do Tour Operators Sell?

While tour operators discovered and eagerly serviced the demand for travel, it was never easy for them to define their products and services. What is it exactly that tour operators are selling?

A tour package is not a physical thing. It’s a plan, a program. Like a computer program it is a set of instructions that if followed with the prescribed hardware will produce a certain result. But like a recipe it will not produce exactly the same result every time. Each time will be a little different depending on a whole range of variations between one situation and another.

A tour operator may take you to see the Eiffel Tower, but he doesn’t own the Eiffel Tower. Tour operators don’t own their principal assets. What they do own is the experience and knowledge of creating great travel experiences. Each has its own individual style and vision to share with those of like mind. It is through developing its own unique vision that the tour operator secures a competitive advantage.

Tour operators know how to navigate through the hassles of getting from one place to another so that their guests can travel painlessly. They know where to go, how to get there, who to talk to, and endless details that are hard to see unless an error or omission allows one to poke through the smooth surface of the operation.

But it can’t only be the mechanics. The professional handling of the mechanics serves to create the foundation upon which the operator can build the program. But the program must be transcendent. It must capture the imagination of the guest. At the top of the pyramid in the structure of the tour operation is the vision. That is ultimately what the tour operator is selling. That is what all the other pieces are there to serve.

As tour operators compete with each other for their share of the travel market, they keep seeking new areas and new ways to use their skills to create unique travel experiences.

At some point tour operators began to realize that their skills could be applied to a series of activities in a single destination, organized around a theme rather than a series of places on a map.

They realized that the core of what they are offering is not a travel itinerary, but rather a series of activities and experiences. From there it was a logical step for tour operators to become event operators.

Today the basic template of tour operation has been stretched and adapted into many different specialty forms. With only a slight tweak the tour becomes an event. Both contain the same essential elements, just in different balances.

From Sporting Events to Original Events

One of the first ways tour operators got into events was by creating packages of accommodations, transportation, tickets and activities to make it easy for people to enjoy sporting events such as the Rose Bowl or the Kentucky Derby. These kinds of events packages continue to be very popular.

They are closely related to special interest tours that focus on particular subjects, such as cooking, wine, hiking, swimming, surfing, history etc. ad infinitum. Within this wide range of possibilities it was almost inevitable that tour operators move into the realm of producing their own events from scratch. Tauck has been a trailblazer in this field.

Since the early 2000s, Tauck has been developing its events as a separate division, adapting all of the skills of tour management to a new specialty of event creation.

Tauck recognized long ago the affinity between tour operation and theater and show business. A tour, as offered by Tauck, is a production. Tauck people use the word “choreography” when discussing the structure of an itinerary.

Tauck first got into events per se with the introduction of its Celebration of the Roses Event in 2003. From there the company evolved into creating its own events. One of its early attempts was Roman Holiday. It was an easy jump from traditional touring, because if you are going to a place like Rome, it could take an eternity to experience all the city has to offer. So an itinerary that focuses entirely on Rome was a natural progression from the panorama tour that included many cities in one itinerary.

A big breakthrough took place when Tauck inaugurated a partnership with filmmaker Ken Burns. Tauck was able to tie into Burns’ films as central themes and to merge filmmaking and tour operation. Tauck started the series with its Ken Burns Civil War Event in Washington, D.C. Through its events production, the company figured out new ways adapt its tour logistics to structure an event.

Tauck’s planners constructed a multi-level tour that combined several groups into one larger group. The individual groups would travel along a “tour track,” a program of activities within the area. The groups would be rotated around that track then gather together as one mega group for evening activities designed for large groups, and which in fact would not be possible to support without a large group.

Evening events might be a jazz performance for the Tauck Ken Burns Jazz Event package in New Orleans. Or it could be a reception in the Library of Congress with a chance to meet Ken Burns for the Civil War event. Tauck has built its series of Ken Burns events into several now, including a Chicago event and a New York event.

The boundaries between these kinds of specialties are increasingly blurred. They all run into each other. And that takes us back to the beginning, the most basic element of what is going on when you take a tour. It all comes back to the basics, people together, enjoying themselves and each other, experiencing new things and learning. It’s really a party. That’s what we humans like to do.

Now summer is here, the season when people across the country unleash their travel urges and take to the highways and airways. You may well be traveling now, and if so I hope you are enjoying it to the max. Wherever you are I hope this reaches you to bring you my best wishes and hopes that you have the best trip of your life.

Until we meet again I remain,