The World Through a Gorilla’s Eyes

When someone asked recently which of the wilderness experiences of my life have had the most profound effect on me, the first thing that came to mind was gorilla trekking in Rwanda. It is really in a class by itself. Scientists say gorillas share 98 percent of human DNA. As close as we get to our pet dogs and cats, how amazing to encounter a fellow being that is so close to human beings!

Besides being fellow primates, I think the mountain gorillas are beautiful, noble animals with their own kind of grace, even with very large body weight. The fact that there are only about 900 mountain gorillas still living on earth creates a sense of urgency to take the opportunity to see them while we still can.

The species is in danger of being wiped out, and biologically speaking they are from our neighborhood, so it seems like we should care. That’s especially true since the only predators they have to worry about are a rare leopard or humans. The biggest danger to the species is poaching by human bounty hunters who sell their body parts. 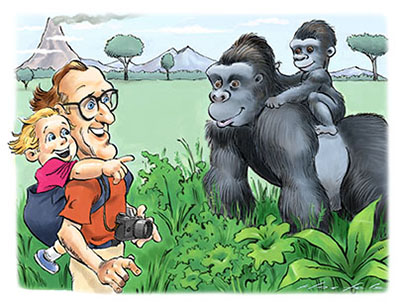 It seems like one of those many tragedies we hear about daily that we can’t do anything about. But in this case, fortunately, we can do something. The protection of the gorillas is largely funded by fees paid by people who go to encounter them. If you go you can actually help protect the species from extinction.

Fortunately many people do care about the mountain gorillas, and they are now being protected by wildlife conservation authorities of the countries where they live. And the populations are growing again.

The Massif
The mountain gorillas live in three African countries: Rwanda, Uganda and the Democratic Republic of the Congo. But that is misleading. It’s really only one place, the Virunga Massif.

“Massif” is a geological term for a part of the earth’s crust that is perforated with faults and subject to tectonic movements. The Virunga Massif is a 3,000-square mile area surrounding a chain of eight volcanoes. It is an area of enchanting beauty, with crystal clear lakes and low-hanging clouds. The fertile volcanic soil produces some of the richest, most colorful vegetation in the world.

Though national boundaries of the three countries are drawn through the Massif, it retains its integrity as a single place because all three countries have designated their parts of it as protected national park land. It’s a place that would be thrilling to experience even without the mountain gorillas.

Trekking and Tracking
My trip began with an overnight stay at a scenic lodge on a mountaintop overlooking large lakes in Rwanda. We gathered at 5:30 a.m. to have breakfast and head for Volcanoes National Park where we met our guides and trackers, Francois and Pappy.

Francois started as a porter for Dian Fossey, the woman credited with saving the gorillas from extinction. He devoted his life to studying the gorillas, actually becoming friends with them. He spent a year living with one of the gorilla families, traveling with them every day, and when they stopped for the night, he stopped too and camped nearby. He got to know them and they became accustomed to a human presence, which is why we can approach them.

Francois said the gorillas are nomadic and travel every day, finding a new spot to settle for the night. They live the traveling life! Most of the group sleeps in the trees and the senior silverback keeps watch on the ground.

They are vegetarians and can eat almost anything that grows. The fertile rainforest is like a cornucopia for them. They spend their days wandering the landscape, then stopping and resting, eating, lounging, playing. If it wasn’t for the poachers, life would be easy for them.

Francois demonstrated the vocabulary he had developed for communicating with them. A low growling purr meant “Hello.” Adding a high tenor sound meant “no problem.” A staccato “Ah! Ah! Ah!” meant “Get back!”

After the briefing our guides led us to the slope of one of the mountains and that’s where I learned about the “trekking” part of gorilla trekking. It’s sometimes called “tracking,” because you are searching for the elusive gorilla families who move every day. But it also involves some serious hiking.

It was daunting at first to look at the forested mountainside we were going to have to climb, but once we got started we quickly got into the swing of it. It is equatorial country, but because of high altitude it is temperate. The temperate rainforest is not steaming hot like the tropical rainforest, but it is jungle. We hiked through the thick growth of trees and brush, stepping over slippery logs, pushing branches aside, grabbing onto vines or tree trunks for support. As someone said, “It’s a trip you have to work for.”

The guides and caretakers of the park keep tabs on the gorillas to protect them as well as to lead the visitors to them. Francois was taking us to the family he knew intimately. He knew where they were the day before and had a good idea where to find them. And he received information on their whereabouts from other rangers via his radio phone.

Primate Encounter
We hiked for two and a half hours, climbing from 7,800 feet to 9,100 feet elevation. Sometimes it felt like as if we were hiking straight up the mountainside. Finally our trajectory leveled off near the top of a hill and we came upon a veterinarian returning from a visit to the gorillas and a new baby that had been born four days before. She was happy to report that the baby was healthy. Add one to the population. The gorillas, she told us, were just ahead.

A few moments later we rounded a bend in the trail and suddenly the gorillas were right in front of us. It was an odd sensation. My first impression was seeing many furry black heads sticking up out of the tall grass on a slope. They didn’t even bother turning their heads to look at us. They just kept doing what they were doing, lounging, playing, foraging or eating leaves, fruits or roots.

As some turned nonchalantly to look at us, or moved around we began to see their faces and their bodies. The tribe had about 20 members, including babies on their mothers’ backs, adolescents, mature females, and one magnificent bull ape, a silverback that was the head of the family.

We had been briefed on how to behave around them. When you are around a silverback that weighs several hundred pounds you must adopt submissive body language. You don’t look him straight in the eye because that is confrontational, and you do not want a confrontation with a being of that dimension and strength. So you lower your eyes, ease back and make it clear with your body language that you are a friend.

The visitations are strictly regulated and visitors are only allowed an hour with the apes. But that was enough. We got very close to them. One walked close enough to me to touch, though I didn’t. It was an amazing encounter, food for thought for a long time, something to marvel over for the rest of your life.

When I returned to my cabin at the lodge that night I thought of my new friends in the wilderness and wondered where they were at that moment and what they were doing.

It was a dark, moonless night and on the mountaintop far from any cities the sky was packed with stars. It was pure splendor. As I contemplated my gorilla friends I thought that their lives don’t seem so bad. They reminded me of humans on the beach, on holiday. They don’t have cell phones, internet, luxury lofts or all of the encumbrances of our complicated lives. But they have this great beauty every day and night. And they seem to enjoy themselves.

We take for granted that we are the superior beings, and there is no doubt that we are very clever. And I certainly enjoy all the toys of civilized life. But I wonder. I’m not so sure which of us is really the wiser, or the happier.

I guess I’ll never know the answer to that question. 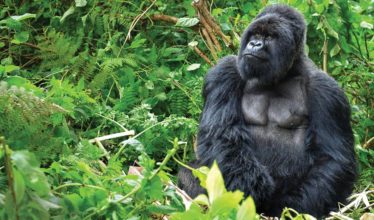 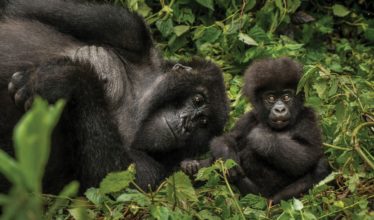