In a materialistic society we are highly conscious of what we lose as we get older and see the physical perfection and vitality of youth slipping away. But there are gains, too, as we get older, though they are more inward and subtle.

If someone were to ask me to put the ultimate reason I travel into one word, I would probably choose the word “perspective.”

Like many others, I often feel that I have a work demon on my back. It chases me around, and hounds me if I get an urge to pause and just let the mind run free.

I still believe in the strong work ethic instilled in me from an early age. But even when under the influence of the compulsion to work constantly, I can sometimes see that working incessantly will actually produce lesser results than if I allowed myself to take a break once in a while and get a change in perspective.

When I am stuck on a problem and my progress has stalled, I often find that what I need is not more time focused on the task at hand. I need to get up, get moving. What I need is a break, a change in perspective.

Many times I have seen that when I do take a break and then come back to work, I get more done in less time. 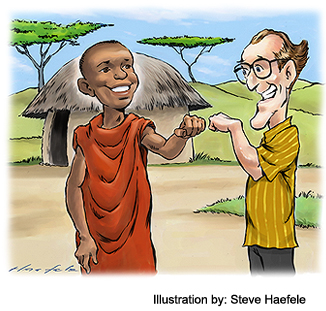 How many times in your life did a wise elder advise you to “sleep on it” when you were at an impasse, confronted by a seemingly insoluble problem? And how often did you find that you woke the next morning to a new world, and the problem that had defeated you the night before, no longer seemed overwhelming?

Just by sleeping, dreaming, letting some time pass and experiencing the dawning of a new sun, you somehow gained the wherewithal to take on the previously insurmountable. Rest, refreshment and the passing of time have given you a valuable change in perspective. If I don’t have a change of perspective at intervals during the day I will veer off into a dead zone of unproductiveness, enmired in a muck of stale energy.

You can get the needed change of perspective in any number of ways, depending on your situation and how much time you can break free. Just getting up from your desk and walking to another room can give you some refreshment. Taking a walk outside, going out into nature, can be even better. These are necessary activities we need to program into our daily schedules as necessities to maintain a healthy and productive state.

This principle also operates on a higher level. As much as we need changes of perspective in small doses over the course of a day, we need them in larger doses at intervals during the year. Once in a while, for everyone in his own way and time, we need a big change of scene. During stressful times we need it even more.

Just getting some time off can be a great renewal. Going on a beach vacation, or spending time in a beautiful natural setting can be highly refreshing and alter the perspective significantly.

But the largest and most significant way we can alter our perspective is to go to a strange and foreign land and observe how people live there, how differently they see the world from the way you do.

The experience of encountering a very different view along the continuum of human experience broadens the context in which you see the world and where you place yourself and everything else within it. The more broadly you can posit those various cultural reference points, the broader a base of understanding you will bring to every situation.

In observing such broad variations within humanity, I feel I am getting closer to understanding what is common to us all. We know there is a common ground among all human beings. We learn not only from spiritual teachings, but from science and the discovery of DNA that we all come from the same source and share a common humanity.

This has been one of the most wonderful discoveries of my life, to find through traveling a common humanity with people from remotely different cultures, languages and ways of life. I know there is a common ground, so I always seek it.

I have come to believe that all people share in our DNA a lot more than just our physical structure. Noam Chomsky has proved to satisfaction of the scientific community that all people inherit genetically a universal grammar that underlies all languages.

From my own experience I have come to believe that there is also a universal morality. This thesis is constantly tested as I travel the world. And so far my belief has not been shaken.

There are human universals. A smile, a tear, a kind look. Gestures of honor from one person to another. These are things I see in all people I encounter, from Masai tribesmen living in huts in Kenya, to Chinese farmers, to Middle Eastern diplomats. There are universals, and the more variation I observe, the stronger is my understanding of what all people have in common.

The story of Ishi is one that illustrates that universality clearly to me. Ishi was the last survivor of a native American tribe in California. In 1911 when Ishi had no more fellow tribesmen, he presented himself to the Euro Americans who lived there. He had lived in the wilds all his life and was 50 years old when he first encountered white American society. His people had had no known contact with the European immigrants throughout history. These were cultures that were separate going back as far as we can see.

Fortunately for Ishi, he was discovered by an anthropologist who took him under his protection and helped him integrate into the society of white America in the early 20th Century. Though Ishi had been raised in a completely different culture, he adapted well and even became somewhat of a celebrity. I was struck when I heard that one of his contemporaries described him as a “gentleman.”

A man who lived in the wilds till he was 50 would have been described as a “savage” by European Americans at the time. The fact that he was seen as a “gentleman” to me supports my belief that there is a universal human morality, one that speaks across cultural barriers even between cultures with no historical connection.

That universality is the most profound discovery that has come through my travels, one that gives me great reassurance and hope for the future of humanity. And that is a big thing. I think it is an important part of what has made homo sapiens the most successful species on Earth.

I believe that the broader you can make your perspective, the better you will feel about human beings, the earth and life itself, and the greater will be your legacy to others. Broadening your perspective changes you. It really makes you a different person, and I think a better one. Every experience that broadens your perspective will make you a little wiser, and a little kinder.

With the great diversity of human culture on earth, there is no limit to how much you can expand your understanding. I heartily recommend to all my friends and acquaintances, and everyone I care about, to seize the opportunities available to get out there and expose yourself to new experiences, new cultures, foods, music, art and philosophy through travel. It will make you a better person.

That’s my recommendation, and I’m sticking with it.

You never outgrow your need for travel.

See you on the road.