The Romance of Train Travel

As I observe the rising popularity of luxury train travel, sleeper car trips, observation dome cars and refurbished classic trains that bring back a long-past era of elegant train travel, I think: Of course! It makes perfect sense. For whatever reason it went out of style, there is plenty of reason for it to come back now.

The elegant style of train travel passed away because of a confluence of economic and political factors along with the arbitrary changes of style that take place over time in an evolving culture. 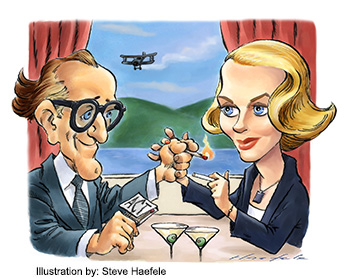 The most obvious reason was the rise of air travel. The new medium of transportation was blatantly superior to trains in many ways, so it superseded them as the principal medium of long-distance travel.

Air travel increased the human power over distance and time by orders of magnitude. The increase in speed was astonishing, nearly incomprehensible at the time. So train travel became passé and air travel became the new, modern way of traveling.

I could travel from New York to Los Angeles with a 19-hour train ride to Chicago, a five-hour layover, then another train from Chicago to LA for 43 hours, a total of 67 hours. Or I could fly in six hours.

That is, if everything goes right. But these days when you are flying, that is increasingly unlikely.

There is a piece of conventional wisdom that progress moves forward in a straight line and always leads to things getting better. But anyone older than 21 has probably learned the error of that idea.

Progress leaves many fine things by the wayside and some are worth going back and retrieving, throwing them back into the mix of modern progress. Train travel is one of those things. Its recent dramatic rise in popularity has proven that it is worthy of reconsideration in a new context.

Air travel has evolved to where it has created a demand for what was left behind with train travel. Some of that demand is based on nostalgia, a longing to return to a simpler time. But much of it is based on the fact that trains can be a great way to travel.

In its early days air travel was for the elite, the leading edge of the culturati. The term “jet set” referred to the coolest, smartest, most up-to-date people. Those globetrotters were a new consciousness, the true moderns. Once you experienced the power of jet travel, your perspective on the world changed. It was a heady experience. Human power over space and time leapfrogged ahead.

Fast forward another 70 years and it has evolved into something very different.

Mass Market in the Sky

Today air travel is a mass market commodity. It is all about moving the most people as efficiently as possible, and building the bottom line. Hats off to the airline industry for succeeding brilliantly in achieving its objectives. The global airline network today provides the means to travel almost anywhere on earth within a matter of hours.

But as the business model of air travel evolved, the adventure and romance was distilled out of it. Little attention is paid to the fantastic fact that you are flying high over the earth across vast spaces. The on-board experience is rather engineered to emulate a restaurant or movie theater.

Elegance fell by the wayside. People used to dress up for air travel, as if it were a great occasion. Now people crowd in wearing tank tops and flip flops. Rigorous airline security measures and the moving of vast numbers of people have made airports stressful places.

Flying has become a way of getting from point A to point B and little more. People don’t arrive at a destination raving about their plane trip. They are just grateful if they reached their destination with a minimum of hassle.

And that brings us back to the scenario in which elegant train travel makes its comeback. Perhaps we should not be surprised when we look at all train travel offers.

A Return to Ease and Elegance

Riding the New York City subway may not be a thrill for most people, though I find it superior to fighting through traffic snarls on the surface. But today there are many ways to experience truly fine train travel.

You can travel easily on trains around the European continent and rarely miss a car or an airplane. In Switzerland the rail travel system is so comprehensive that it covers virtually the whole country.

There are high-speed trains in Europe and Asia as fast as 160 miles per hour, faster than cars and even faster than airplanes for relatively short distances if you figure in airport time.

Best of all, there are classic trains that have been restored to their previous glory, with elegant overnight sleeper compartments and fine dining that can be enjoyed while the landscape races by. There are sightseeing trains that provide a comfortable way to see some of the world’s most beautiful places, such as the Canadian Rockies. When you don’t have to drive, you can give all your attention your surroundings.

Trains are deeply embedded in human consciousness, especially in America. Trains were core to the development of America, the westward expansion, and the Great Depression when millions of unemployed and homeless hopped freights to travel. When you travel by train, you can experience many of these associations.

Trains date back at least to 600 BC in Greece, when cars pulled by men or animals rolled on grooves in limestone. James Watt developed a steam engine in 1769 to power machines in factories, and by 1785 he had miniaturized the technology with a piston engine small enough to power a train.

The steam locomotive vastly changed the world of the 19th Century. For the first time people could travel across land as easily as they had traveled across the sea for millennia. It was the first form of land transportation faster than a horse.

The list of movies with iconic railroad scenes is endless, including Murder on the Orient Express, Hard Day’s Night, From Russia with Love and North by Northwest. And there are countless songs about trains. Often trains are metaphors, such as when Curtis Mayfield wrote, “All you need is faith to hear the diesels humming. Don’t need no ticket, you just thank The Lord.”

My playlist of train songs would be long indeed, with songs like “The Train Kept a Rollin’”, “Long Train Running”, “Midnight Train to Georgia” and “Hobo’s Lullaby.” They come rushing into my memory when I am on a train.

Trains even figured into Einstein’s Theory of Relativity. It was while riding trains as a youth in Munich, experiencing the sensation of feeling like you are standing still while the platform is moving, that he began the thinking about matters of space and time that eventually led to his earthshattering theory.

In one of his “thought experiments” Einstein imagined the difference in view of a person riding a train and another on the land as the train went by. If two lightning strikes at the front and the rear of the train appeared to be simultaneous to the person on the land, they would not be simultaneous to the person on the moving train because he would be traveling toward one and away from the other.

Which is all to say, there is no end to the fascination with trains. I have just begun to talk about them and could continue until late into the night.

I highly recommend partaking of the modern train experience.