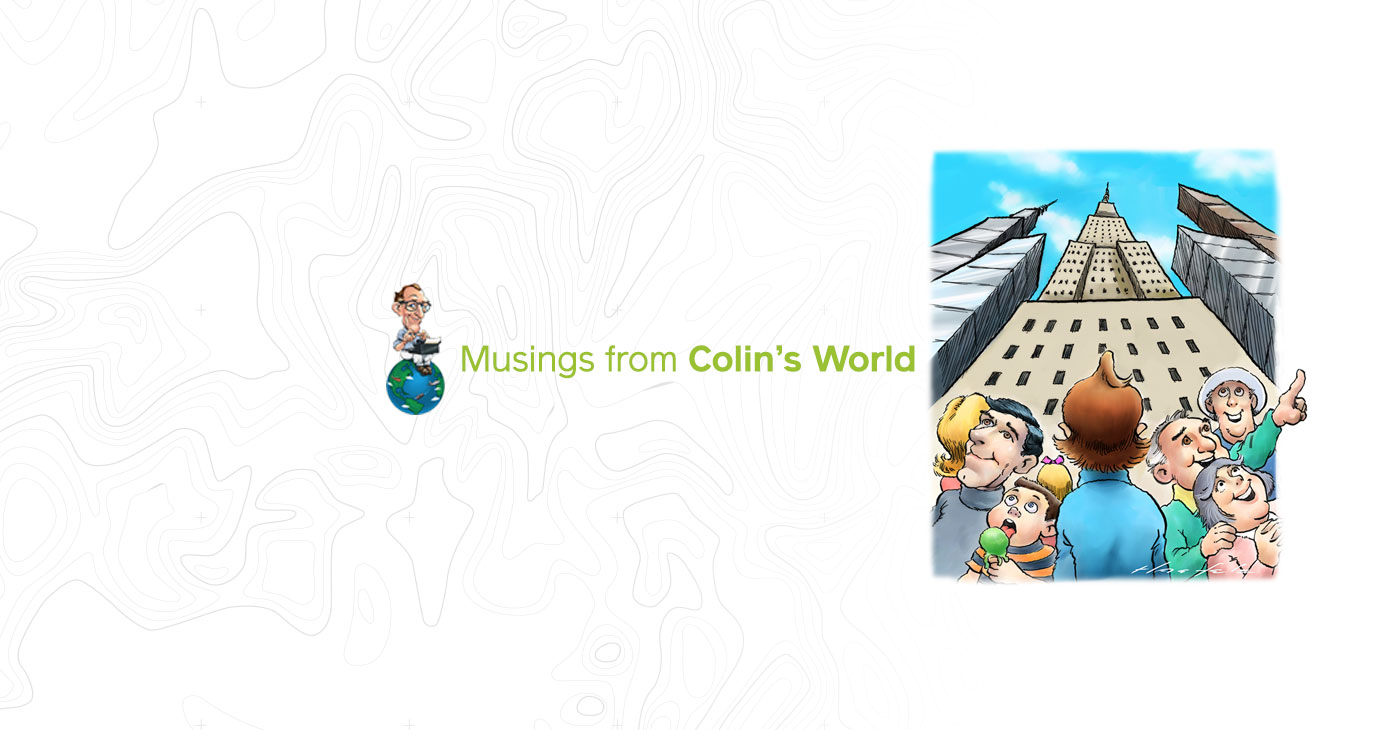 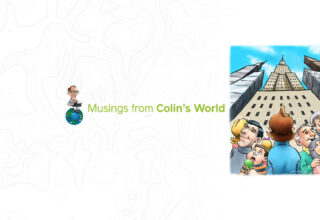 The tallest building in my hometown was 12 stories high. My father had an office there, and I used to love to go up to the highest floors and look out of the windows from such a height that it felt like I was flying over the earth. That was the beginning of my love of tall buildings.

My world was dominated by the natural environment, but I saw pictures of places where man-made structures were the most riveting sights on the landscapes, and I was drawn to them. To me they were the greatest monuments of human achievement. As I catalogued them in my mind, I became a sort of monument collector. 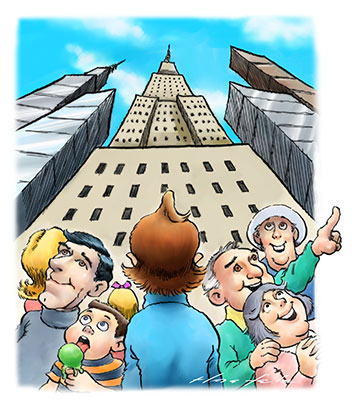 I saw my first real skyscrapers in Chicago in my late teens. I was mesmerized by the dense cluster of massive towers downtown. It seemed like one mighty wall of concrete and steel, with millions of tiny windows like perforations on a computer punch card, each representing an individual world. The sight of the Chicago skyline was staggering. It took my consciousness to a new level of possibility.

At that time Chicago’s tallest buildings were the Sears Tower (now the Willis Tower), the Standard Oil Building (now the AON Center), and the John Hancock building. And there are countless other towers in Chicago, the original home of the skyscraper.

A few years later I went to live in New York, which was heaven for skyscraper lovers. The New York skyline is even denser than that of Chicago. Hundreds of skyscrapers are scrunched up together on a narrow strip of land only two miles wide. The World Trade Center was the world’s tallest building, when it was completed in 1971, at 110 stories and 1,355 feet tall, though by the time I got there it had been surpassed by the Sears Tower.

New York is packed with great monuments. Practically everywhere you go in Manhattan you are confronted with iconic structures you recognize. They stand out from their backgrounds like glowing, timeless entities.

There was, of course, the incomparable Empire State Building, which reigned unchallenged as the tallest building in the world for nearly 40 years. When it was completed in 1931 at 102 stories and 1,250 feet, it took the title of world’s tallest from the Chrysler Building, which had been completed in 1929 at 1,046 feet. The Chrysler building, with its elegant art deco-style sword top, now appears as the Empire State Building’s smaller sister.

The Woolworth Tower was the tallest when it was completed in 1913 at 58 stories. It’s an elegant period piece, though it seems small on the skyline today. And there is the 22-story Flatiron Building, at 23rd Street, where Broadway cuts diagonally across Fifth Avenue creating a triangular block. Completed in 1902, the Flatiron Building used the new skyscraper engineering to fit a high rise perfectly onto that triangle. It still stands as a distinguished work of architecture.

Another easily identifiable skyscraper on the crowded New York skyline is the Citigroup Center, a 59-story tower mounted on stilt-like pillars, with an unmistakable, diagonally slanted roof. One of the most amazing structures in New York is the Brooklyn Bridge, one of the great engineering feats of all time. Construction began in 1869, and when it was completed in 1883 it stood 277 feet tall and towered over everything in sight, the tallest man-made structure in the Western Hemisphere. People walking over the bridge experienced an exhilarating aerial view that had never been seen. It expanded the consciousness of New Yorkers.

When I travel, I take note of the most distinctive structures that set every city apart.

Views of San Francisco are identifiable by the pyramid-like TransAmerica building, and the Golden Gate Bridge, set into the dramatic landscape of the hills and the bay.

London is identified by the Tower Bridge, and Westminster Abbey, with the Tower of Big Ben, as well as the London Eye.

Paris is unmistakable with the Eiffel Tower, which dates back to 1889, when it became the tallest man-made structure in the world. It was built for the Exposition Universelle, in commemoration of the 100th anniversary of the French Revolution. The most prominent cultural figures opposed it and berated the “odious column of bolted metal.”

It was only supposed to stand for 20 years, but its value for scientific research and telecommunications insured its permanence. The first radio program was broadcast from there in 1925.

Some of the most fascinating world monuments are the oldest. The Great Pyramids of Egypt are still among the most amazing man-made structures in the world, though they were built thousands of years ago.

When I got close to the Pyramids I was fascinated by the remnants of their original smooth limestone covering, which showed that they looked even more perfect thousands of years ago than today.

The Roman Colosseum, from 80 A.D., is still one of the most amazing structures in the world. Gazing up at that colossus you can almost hear the sounds of the crowds that once filled its rows of seats during the events held there.

By the late 20th century the center of skyscraper construction moved from the US to Asia. The Sears Tower gave up its title as world’s tallest to the Petronas Towers in Kuala Lumpur in 1998, and that was surpassed by Taipei 101 in Taiwan in 2004.

Today many of the most distinctive skyscrapers are in Dubai, where a cluster of them sprung up in the desert over a few decades.

Dubai was a simple fishing village and port on the Persian Gulf, but when oil was discovered nearby, Dubai mushroomed into a city with one of the most spectacular skylines in the world.

Dubai got its first high-rise in 1978, the 39-story World Trade Centre. Today there are 911 skyscrapers in Dubai. The centerpiece is the Burj Khalifa, an astonishing spire that shoots 2,722 feet into the atmosphere. It is by far the world’s tallest man-made structure, and likely to hold the title for a while.

Returning to New York from Dubai, sad to say, the Empire State Building looked rather stubby. It’s not even half as tall as the Burj Khalifa.

The list is endless: The Leaning Tower of Pisa, the Great Wall of China, Seattle’s Space Needle, St. Louis’s Arch, the Guggenheim museums in New York and Bilbao, Spain. There is Angkor Wat in Siem Reap, Cambodia; Le Mont-Saint-Michel in Normandy, France; The Shard in London; Sagrada Família in Barcelona, Spain; St. Basil’s Cathedral in Moscow; Château Frontenac in Québec City; The Gherkin in London; The Parthenon in Athens; the Taj Mahal in Agra, India; Notre Dame Cathedral in Paris, and many more.

There are still so many I haven’t seen, and certainly many I don’t even know about. But I will keep traveling and keep collecting.