The International King of Cheeseburgers

There is no doubt that the United States has undergone a wave of heightened culinary sophistication over the last 30 years. Americans are more knowledgeable about food, and cuisine is considered a more important part of the travel experience than ever before.

Tour operators have expanded the culinary element of their tours, including meals that are not just tasty and nourishing, but also culturally immersive and instructive. Every segment of the travel industry has upped its game to get with the wave of growing culinary interest.

Americans have moved from the simple meat-and-potatoes formula to a much wider range of colorful and culturally diverse foods. For an increasing number of travelers the culinary culture of each region is one of its most interesting elements. They don’t want a meal to be merely a break to refuel. They want it to be a core part of the cultural experience. And it makes a lot of sense that it should be. It’s unavoidable that we spend a lot of our time eating. Mealtime shouldn’t be dead time.

But I must confess – and this is a tough confession to make – when it comes to culinary sophistication I am way behind the curve. It’s not that I’m not curious or adventurous about food. I do make a point of trying new things when I am traveling. I see culinary experiences as a principal part of the exploration of a place. But when it comes to cuisine I’m a slow learner.

It’s not that I don’t have the intellectual capacity to recognize the cultural richness of cuisine. I have come to realize that a fine dish can be as culturally rich as a fine painting, sculpture or symphony.

The problem is that when it’s time to eat, my brain takes a sabbatical and leaves my stomach in charge. It’s all id, just raw animal urge. When it’s time to feed the beast, the intellect is elbowed aside by the digestive will. At that moment I am a primitive.

When a waiter comes up and starts reciting the day’s specialty items in elaborate detail, I often have trouble following his train of thought. When I am hungry, I just want to get to it. When my stomach and teeth scream for a slab of beef, my brain is powerless to offer resistance. 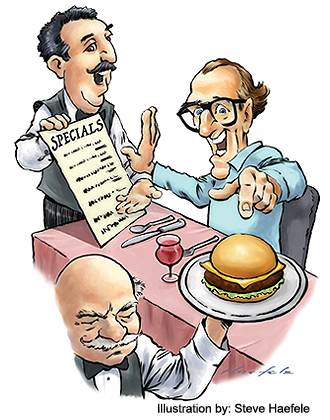 Here’s how it happens. After spending the day passing through the dark tunnel of aviation with its various chambers of ticketing, baggage check, security, finding the gate, boarding, spending hours in a small cabin with hundreds of other people, then landing and going through it all in reverse, by the time I get to my hotel I am weary and worn down. And I am suddenly voraciously hungry.

After I go to my room, unpack and freshen up, I want to go to the hotel restaurant and eat. I want to do it quickly and efficiently. And most of the time what I crave irresistibly is a cheeseburger. I don’t need to hear the chef’s specials. I don’t even want to look at the menu. I’m too hungry and tired for that. I know what I want and I want it now. It’s a cheeseburger.

My older sister had me pegged already when I was 6 years old. It was already apparent that I was hopeless as a gourmet. When my father would take my sister and I out to eat, we would struggle between two places.

My sister always wanted the Pennant Cafeteria, an upscale, genteel dining establishment where many choices were displayed and you could pick what you wanted, put it on your tray and slide it over to the cashier.

When it was my turn to choose, I always wanted to go to Blenders. It was a traditional diner, with booths with formica-topped tables and a soda fountain bar with chrome stools topped with spinning red vinyl seats. When it came time to order, I always chose the same thing: a cheeseburger and a chocolate malt.

My sister would sneer deprecatingly at me. “Why do you always get the same thing? Why don’t you try something different?”

I was hopeless from the beginning. I was born to love cheeseburgers.

But you know what? Considered in light of today’s increased culinary sophistication, the hamburger holds up pretty well. It has become an international favorite.

Some of my countrymen disdain the cheeseburger as dull and boring, but from the international perspective, the cheeseburger has reason to be proud. What is exotic to me in China might be the old standby to a native Chinese. The same is true in reverse.

The humble cheeseburger has conquered the world. I can satisfy my craving for a cheeseburger in almost every country I go to and feel perfectly at home.

I don’t do McDonald’s or Burger King, but it is testament to the power of the burger that those companies have colonized the world. The versatile burger has become the staple of fast food restaurants, and also has a place on the menus of quality restaurants, most of which have their own special versions.

Every place does burgers its own way. You don’t expect a burger in Cairo to taste like one in Los Angeles. It will be an Egyptian style burger. But it will be a burger. It will fit the definition.

I think I may have eaten more burgers than almost anyone, certainly more than anyone I know well enough to know their eating habits.

I associate burgers with drive-in restaurants with car hops who come to your car, or speakers for placing your order. Like rock and roll, hot rods and juke joints, it was part of the colorful American popular culture that took the world by storm.

The hamburger is such a national treasure that its authorship is claimed by many disputing factions. No one knows for sure where it came from. Maybe it was a gift to humanity at the time of creation.

There are numerous stories about the origin of the hamburger. The name would seem to indicate that it came from the German city of Hamburg, but that’s too easy. In America, the true home of the burger, all the cultural and culinary elements of the world are jumbled up together.

A burger is a sandwich, so we must credit the Earl of Sandwich for sticking food between two slices of bread. But a burger is a special kind of sandwich. It is made with a bun, and it has a slab of ground beef in it. That’s the basic definition. Beyond that there are endless variations.

It may have various kinds of cheese, lettuce, tomato, onion, pickle, ketchup, mustard, mayonnaise or any number of other ingredients. There are many kinds of specialty burgers: bacon cheeseburgers, pizza burgers, taco burgers, even veggie burgers. But why am I telling you this? Of course you know. That’s the point. Everyone knows. It’s a human universal.

No one is sure who invented it. Connecticut claims it was Louis Lassen, a Danish immigrant who ran Louis’ Lunch in New Haven.

The White Castle chain claims it was invented in Hamburg by Otto Kuase, and first became famous in America at the 1904 St. Louis World’s Fair.

The Seymour Community Historical Society of Seymour, Wisconsin, claims its native son Charlie Nagreen, aka “Hamburger Charlie,” invented the hamburger to sell as an easy food to carry around at the 1885 Seymour Fair. Nagreen named it “hamburger” after the Hamburg steak, a ground beef patty that local German immigrants were familiar with.

Frank and Charles Menches claimed they invented the hamburger when they ran out of pork and substituted beef in their sandwiches at the Erie County Fair in 1885 in Hamburg, New York.

Fletcher Davis claimed to have invented the hamburger in the 1880s at his lunch counter in of Athens, Texas.

The further you go down the rabbit hole the more alternative stories you find. “Hamburg Beefsteak” or “Hamburger Steak” appears on menus going back to the early 1800s.

So the hamburger is one of those inventions that seems to belong to all of us.

But I have heard no one else claim to be the International King of Cheeseburgers.

I wish you a happy spring! (It’s coming soon, I promise.)