The mountains no doubt, the Alps. My earliest memory of Switzerland is the story of Heidi, a young girl living in the mountains. After that I experienced a series of more or less random, unrelated associations.

There was Swiss cheese, which I first experienced in cartoons as a comical image of cheese with holes in it.

Swiss timepieces were held up as the highest standard of quality in the world.

Swiss chocolate, including mugs of rich hot chocolate, were unquestionably as good as it gets. The Swiss branding was always an assurance that you were getting the best.

Swiss banks were the ultimate, though they often emerged in crime stories because of the unnamed bank accounts, free of scrutiny.

If a musician performed at the Montreux Jazz festival it gave them solid credibility.

Swiss Army Knives are a hundred tools packed into a handful. If you have one of these brilliant inventions you are ready for anything, ready to go camping, or to war. But then Switzerland never went to war.

Speaking of that, the Swiss Army has an aura of tremendous stature and moral authority because it is a defensive army. Switzerland has not engaged in war in 200 years. And no one even thinks of invading Switzerland.

But although Switzerland has remained neutral since 1815 it is not isolationist. On the contrary, it has been actively involved in peace-building actions and processes during many international conflicts.

The Geneva Conventions are a series of treaties designed to establish a framework of international law for the humane treatment of people during war. In war after war, Switzerland emerges as the broker of peace. Peace talks always seem to take place in Geneva. Then there was the Red Cross, another Swiss institution, which is respected universally as a benign organization helping those must vulnerable.

And what about fondue? That odd, delightfully delicious food came from Switzerland.

At some point I noticed that everything from Switzerland carried a strong brand of authority and quality. But the more I learned, the less I understood what was in back of all this. 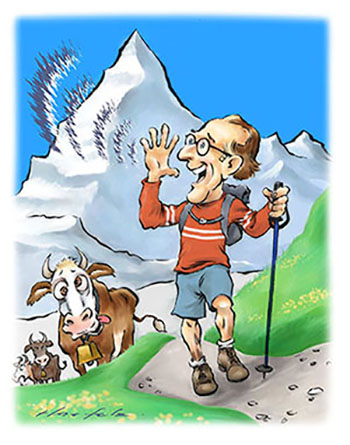 In college I learned of Carl Jung, who gave us concepts like the collective unconscious, introvert/extrovert and synchronicity. He also wrote about how his youth in Switzerland shaped his ideas and philosophies.

The Dada conceptual art movement began in Zurich in 1916 as a cultural revolt against the nationalism and rationalism that led Europe into the catastrophe of World War I. It influenced artists from the Surrealists through Andy Warhol, Yoko Ono and David Bowie.

For tourism, Switzerland offers a rich cornucopia of delights, as diverse as the country itself, with the sophisticated cities of Zurich, Geneva, Berne, Lucerne and Montreaux, and the endless delights of the mountains, from cogwheel trains to lake cruises, picturesque villages with flower-covered chalets and of course skiing. With the Swiss Rail system, as efficient as Swiss clockwork, you can travel the country easily without a car.

Gradually I began to discern something behind all these disparate things that held all them together. It intrigued me and aroused my curiosity. What is this Switzerland? What makes Switzerland a nation?

What Defines a Nation?

Nations don’t just fall together accidentally or emerge out of nothing. To make a modern nation, a large group of people must share a bedrock of common traits and beliefs. What, I wondered, is the uniting principle of Switzerland?

In most cases nationhood is based on a shared language and ethnic background. But Switzerland has four language regions. It seems a wonder that the country has been able to hold itself together and not break into warring factions as so many others have.

At some point it occurred to me that diversity must be at the core of Switzerland’s identity as a nation, and what has made it such a world leader in the cause of peace.

The people of Switzerland were the forerunners of today’s multicultural world. They learned how people of differing cultural heritage can find a common ground and get along. And they have maintained a position of leadership in diplomacy and the art of learning to live together despite differences.

Today with the implosion of electronic technology and modern transportation, people of all kinds have been thrown together. Two hundred years ago people of different nations could effectively live in separate worlds. That is no longer possible.

Now all the cultures of the world live together, and there’s no turning back. We have to learn to live together. The Swiss show us how it is done.

Meanwhile, while the rest of the world has been scrapping, Switzerland has been developing its civilization. Having learned to live in peace, the Swiss have been able to savor and cultivate the finer things in life. When you go to Switzerland you are the beneficiary of centuries of unbroken development.

Perhaps that is why Switzerland is one of the most developed countries. It has the highest wealth per adult and the eighth highest per capita GDP. It ranks near the top globally in many metrics of national performance, including government transparency, civil liberties, quality of life, economic competitiveness and human development. Zürich and Geneva have both been ranked among the top cities in the world for quality of life.

They did not go through the upheaval of the two World Wars and have to build themselves up from the ravages of war, as most of Europe did. They didn’t have to wait for the wars to end to get their peacetime dividend. It was ongoing. Their civilization continued on its upward progression in an unbroken line.

Somehow these diverse groups of people manage to live together and share this beautiful land, the country built around the Alps, the rooftop of Europe.

Back to the Mountains

This brings us back to the Alps, where we began.

Mountains have always been associated with the divine. Throughout history we have sacred mountains, magic mountains, mystic mountains. Surely anyone who has looked at a great mountain peak has experienced that sense of awe.

There may be any number of reasons for that. Some say certain kinds of energies, or negative ions collect around mountain peaks. I suspect it can never be fully accounted for by any scientific principle. But virtually everyone who has seen mountains knows about it.

John Muir said of the mountains of Alaska: “Here … one learns that the world, though made, is yet being made; that this is still the morning of creation; that mountains long conceived are now being born, channels traced for coming rivers, basins hollowed for lakes…”

It seems that the mountains of Switzerland have provided the country with a common heritage, a common belief that is so sublime that it can bring the country together and enable people to drop their squabbles and enjoy the great beauty together.

It’s all about the natural beauty and the spiritual sublimity of the mountains.

So we come back to where we started. It’s all about the Alps and the great natural beauty and spiritual grace that they present. Over the centuries, it seems, Switzerland has absorbed the spiritual grace of the mountains and it has been infused into the culture and the people. And that’s what you experience when you go to Switzerland.

So perhaps I’ll see you there. 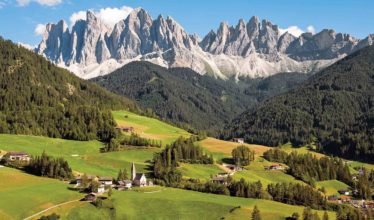