Repetitive Stress Injury (RSI) is one of many modern diseases I never heard of when I was a kid. When I was growing up I read that science had cured most diseases and the few remaining would soon be wiped out.

We were also supposed to be flying around in space by now, visiting other planets, zooming around our cities in flying cars. It seemed inconceivable to me then that we would reach that distant year 2000 without having weekend vacations on Mars.

But here we are already 20 percent through the 21st Century, and unfortunately there are still some diseases. When I hear the latest announcement about some new disease acronym I wonder if I have it, and usually never find out. I remained ignorant of most of the new acronyms until I was diagnosed with one myself: RSI. Repetitive Stress Injury.

Oh yes, and on that other point, we also don’t yet have vacations on Mars. But what we do have is the discovery that the earth is far more full of wonders than we ever imagined before we got out there and started seeing them. And travel on Earth is much more enchanting than it could ever be on Mars anyway.

That brings me back to my favorite theme. Travel. I’ve been accused of naming travel as the answer to all the world’s problems. Well, I don’t go quite that far. I don’t say it’s the 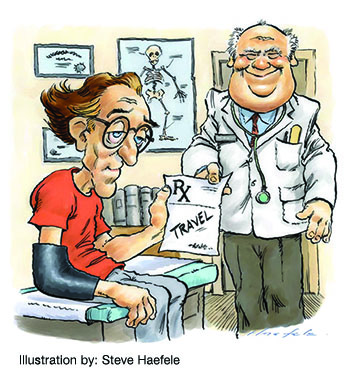 one answer to every problem. But it is one good answer to many problems. In my case I credit it with being the decisive factor in curing RSI.

Here’s my roundabout path to that conclusion.

Coming Down with an RSI

First was the discovery of the injury itself. It was a vague twinge in my elbow that first caught my attention. Gradually the twinge grew into a pain, and eventually the pain started to affect my ability to work at the computer. Someone suggested I might have an RSI so I went to the doctor.

I was diagnosed with an RSI known as tendonitis, an inflammation of the tendon near my elbow. When I learned that the condition also goes by the name of “tennis elbow,” I gratefully embraced that name thinking “tennis elbow” sounded more respectable than the truth, which was that I got it from sitting at a computer.

Injured by sitting too much. How embarrassing! But there it was. I did some research on RSI and discovered that the condition is not actually new at all. It was described in 1700 by an Italian physician who found it in 20 categories of workers, including musicians and clerks. After the invention of the telegraph in the 1800s, repetitive stress became a problem for telegraph operators. It can affect anyone who works in repetitive work that requires you to keep nearly stationary.

Since the late 1970s the incidence of upper limb pain and dysfunction caused by repetitive work has mushroomed. As computers took a central position in practically every workplace, it led to increasing numbers of people spending many hours in a fixed position, performing tasks from their computer stations while sitting physically almost still except for micro movements of the eyes, fingers, hands and arms. So more people have RSIs than ever before.

RSI seems particularly characteristic of our age, when so many people sit still for long periods in their daily lives performing repetitive motions. I suppose there’s some comfort in knowing your problems are shared with many others. So what’s to be done about it?

The Cure is Rest
The question for the doctor is always, “What’s the cure?” I expect him to write a prescription. “Here. Take two of these twice a day and in two weeks you’ll fine.” But in this case there was no pill for it, no magic bullet.

The cure, he said, was rest. It was very simple, very non-pharmaceutical, almost old-fashioned. You have to stop overdoing what you were doing and reverse the trend. Resting the arm is the only real cure.

He did give me a brace for my forearm that strapped a knob against the sore tendon and somehow changed the way the pressure was applied when I typed. That could help, he said, but really the only cure is rest.

I didn’t find that very helpful. My initial reaction was fright. How can I stop work, or even slow down? But regardless of how unfair it seemed, there was no way around it.

In time, he said, you can reverse the effect of what you did to cause the problem. It will take time. You have to change your ways and sustain the change over a period to let the tendon rest and heal.

So there it was. Doctor’s orders. I had to lighten up on the workload, break it up, not sit at the computer for such extended periods. But how am I going to accomplish that? Old habits die hard. Perhaps I could set up a police line around my computer, create a no-man’s land.

It’s difficult to stay away from the computer when it’s sitting in its usual place and all the business that you normally conduct through your computer is still going on. For me the only way to make such a radical change is to take a trip. Uproot! Change the scene.

Travel is always what I turn to when I want to wipe the slate clean and start fresh. On a trip you leave familiar contexts behind and enter a realm in which practically everything is new. Without the same, familiar stimuli happening at the same time every day, it is easier to change your ways, remake yourself.

The Opposite of Repetitive Stress
The reason travel is the best medicine for RSI, is spelled out in the name itself. Repetitive stress is what caused your injury, and the way to get rid of the condition is to remove the cause. Remove the repetitive stress and you will allow the injury to heal.

What is the diametric opposite of repetitive stress? Something not stressful, and not repetitive. We all handle some of both in our lives, but the more we can counter repetitive stress with its opposite, the better for our natural healing capacities. And what is the least repetitive and stressful activity? Going on vacation.

The word “vacation” implies rest, and depending on your current needs and preferences, you can make it as restful as you want. Just removing yourself from your habitual routines and stresses can promote healing.

The other primary element of a vacation is exploration, discovery. If the problem came from too much sitting, then the best antidote may be an active vacation. By taking a tour of some exciting destination and being immersed in a constant flow of things that are new and fascinating, I escape from the repetitive parts of my life.

When something fascinates and absorbs you, your interest gives you energy and pulls you away from the habitual concerns and problems that may have been plaguing you.

Sail Away
So I took a trip. As always I had a great time and forgot about my malady because I was too busy and engaged in new and unfamiliar things to think about it. Right away I felt a difference. It improved a great deal on the trip, and when I went back home refreshed by my trip I was able to start over and try to establish new, healthier habits to give my elbow more resting time. It took a while, but eventually the tendonitis went away.

For me it’s the same antidote as for many other human maladies: get up out of that chair, leave the computer alone for a while, get moving, go on an adventure. Give yourself something fun to distract yourself from what’s bothering you.

The antidote to repetitive stress is its opposite, non repetitive, non stressful, fun, engaging experiences. And the best way to get to a concentrated dose of those kinds of experience is through travel.