Paris in the Footsteps of Hemingway

I love Paris in the springtime.

I love Paris in the fall.

I love Paris in the winter when it drizzles.

I love Paris in the summer, when it sizzles…

I keep running into Hemingway. On a recent visit to Cuba I discovered that Hemingway lived in Cuba for 20 years and wrote seven books there, including A Moveable Feast. That was the first Hemingway book I ever read, the first book assigned in my freshman English class, and is still my favorite Hemingway book.

A Moveable Feast was a memoir of Hemingway’s time as a young man living in Paris from 1921 to 1926. Even though he spent fewer years in Paris than in Cuba, Paris remains the place most often associated with Hemingway. It was a formative period and it left a strong mark on his writing, his personality and his legend. He carried it with him the rest of his life.

The title was taken from a letter he wrote to a friend in 1950:

“If you are lucky enough to have lived in Paris as a young man, then wherever you go for the rest of your life, it stays with you, for Paris is a movable feast.”

This applies to all of us who have the good fortune to visit Paris.

The importance of Paris to Hemingway was partly because it was a formative period, but even more it was based on Paris itself, and what drew him there.

Paris was the center of the world for writers. He could brush shoulders with Gertrude Stein, James Joyce, Sherwood Anderson, Scott Fitzgerald and many others. Why were they there? Because Paris was such a concentrated center of culture and history. Paris was essential for anyone who wanted to be well educated. 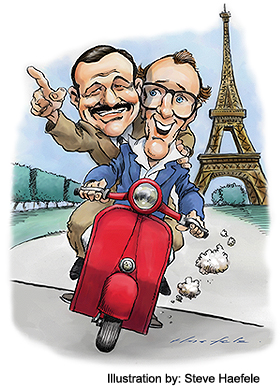 It was the birthplace of Impressionism. Hemingway would stroll every day through the Musée du Luxembourg to look at the Impressionist paintings before they were transferred to the Louvre and the Jeu de Paume. He had learned of Impressionism during his youth at the Art Institute of Chicago. In Paris he studied the paintings of Cézanne and felt that they were teaching him something about how to create the kind of dimension he was seeking in the stories he was writing.

In the Post Impressionist period, Paris remained the center of painting and it was where Picasso spent most of his adult life.

The list of notable French historical events is almost beyond human capacity to comprehend. Gaul, as it was called in the pre-Christian era, was a Roman province and figured heavily into the rise of Caesar, through his successes in the Gallic Wars in 58-51 BC against the Celts.

France was the major military ally of the American colonies in the War of Independence. Without France there probably would not have been a United States of America.

It was the home of philosophers from Descartes through Voltaire and Rousseau down to Jean Paul Sartre and Albert Camus. It gave us the music of Chopin, Debussy and Ravel.

It was the home of Napoleon, the French Revolution and the reshaping of European society that culminated in the fall of the monarchies at the end of World War I. Paris is central to so much of Western Civilization that it simply cannot be ignored.

And let’s not forget wine and cuisine. For wine aficionados, France is unsurpassed. Its culinary culture created a standard for the world.

Paris is incomparable. It is in that rare class of places that stand alone, unique in the world. To the world traveler Paris is indispensable. It has to be on any list of places anyone must experience before calling oneself a world traveler.

My first memory of the word “Paris” was the sound coming from my parents’ record player when I was a crawling toddler and our living room was the vast stadium of my existence.

“I love Paris every moment,” the sultry voice declared, “every moment of the year…”

“Because my love is there…”

Aha! From my first hearing the word Paris was associated with love. And that is a true connection, because Paris can certainly lay claim to being the most romantic city in the world, or certainly one of them. Its reputation for romance goes unchallenged.

“We will always have Paris,” said Bogey to Ingrid Bergman in Casablanca, as if that time together had been the high point of their lives. Even if they had been able to stay together, part of the joy would be remembering that peak moment they shared.

Yes, Paris is that good. That fact is pretty much undisputed, even though it does have its angry detractors. The very passion of their scorn belies any attempt to dismiss their underlying adulation. Love it or hate it, you cannot dismiss it.

I remember the first time I flew into France, looking down at the perfectly cultivated, fertile landscape, and thinking you can’t blame the French for thinking that there is nothing beyond France worth bothering with. The place is so perfectly self contained, so abundant, so naturally beautiful. There is more than enough to take a lifetime to absorb.

Historically and culturally Paris is so rich the only problem is where to begin.

You can plot out a tourist route to include iconic sites such as the Eiffel Tower, the Arc de Triomphe, Notre Dame, Mont Saint Michel, the Champs d’Elyse, the River Seine, the Louvre, the Tuileries Garden. Those monuments will mark the points on your map, but it will be in the spaces between that you get the real experience of France. It breathes in every corner of the city.

Every trip provides new discoveries and many of them are in the realm of known unknowns. Though I hadn’t seen the Eiffel Tower before going to Paris, I knew of it. Of course the real thing far surpassed my preconceptions. But there are also unknown unknowns, things that hit you broadside and surprise you.

Those are things that are completely new and alter your frame of reference. Paris expanded my understanding of what a hotel could be.

I had traveled around the U.S. staying in moderately priced hotels. They provided the basic necessities: a safe, clean space, a bed, a bathroom with little soaps and shampoo and towels. That pretty much defined my concept of a hotel.

But on a tour of Paris I experienced several hotels, fantastic places such as Le Meurice and InterContinental Paris Le Grand. By the end of that tour, my idea of a hotel had jumped to another level. Each was designed with a sharpness of design acuity I had never experienced. They had design themes throughout the hotel, drawing each individual detail into a comprehensive whole.

Art shone back from everywhere I looked, and it wasn’t just pictures on the wall. Design intelligence spoke from every detail in the entire structure, from floor tiles to vases, sculptures, tapestries, wall hangings, paintings and posters. This carried through all the hotels I visited, though each had its own personality.

I realized that a hotel can be much more than just a place to get a shower and a night’s sleep. These hotels were like art museums, or art pieces within a larger museum, the city of Paris itself.

That is how culture speaks to you even if you aren’t looking for it. Of course it would be that way. This is Paris! You don’t have to go to the Louvre to experience it. French culture seeps down through all levels of the city.

The same applies to music, literature and history, which all converge in Paris in extreme intensity. That’s what you can soak in when you are there. What you absorb in a week you can savor for the rest of your life, continuing to draw new insights from it. That’s how rich it is.

On that note, I bid you au revoir. Thank you for accompanying me on a reflective tour of the City of Light.

A Week In… The French Riviera, Provence and Paris 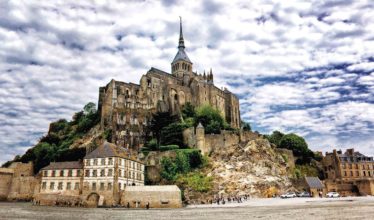