Oberammergau: Passion for the Passion

A small town called Oberammergau has all the beautiful touches you might expect to see in a village in the Bavarian Alps: quaintly crafted alpine style chalets with flowers overflowing from their window boxes, ancient cobblestone streets lined with shops and cafes, and the misty silhouettes of the mighty Alps looming in the background. It’s a popular area for skiing, snowboarding, hiking and all the things people enjoy in the mountains.

But Oberammergau has something that distinguishes it from any other place in the world, a Passion Play that has been presented every ten years since 1634. The next one will be in 2020, and people are already planning to secure their tickets.

The Passion Play draws people from all over the world. In 2010 half a million people saw the play during its season May through October. In every performance 5,000 people file into the theater, as many as the entire population of Oberammergau. Every one of 109 performances in 2010 was sold out.

You could say it’s one of the longest running hits in the world. It was already drawing 100,000 visitors as far back as the late 1800s. There are records from 1880 showing that in that year a tour operator rented out a whole hotel to house his guests. The demand is tremendous, and it’s one of those kinds of things you really need the support of a tour operator if you want to ensure a ticket and a place to say. It’s still four years away, and availability is already tightening up.

This Passion Play tradition, now maintained for almost 400 years, has taken on a life of its own, much larger than any one of the thousands of local people who participate in every performance.

At a time when cultural immersion and interaction are becoming more and more important to travelers, Oberammergau provides an opportunity to experience a unique cultural event that connects the present day to a theatrical tradition going back more than 200 years before the rise of Broadway in New York.

A Promise Kept for Nearly 400 Years 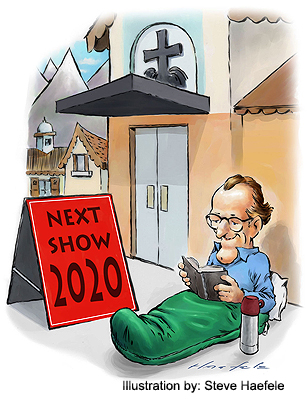 It’s hard for us now to imagine a time so remote, before electric lights, automobiles, telephones and so many things we have come to take for granted. In 1633 southern Germany had been ravaged by the Thirty Years war, which wiped out 20 or 30 percent of the German population and left the country wracked with poverty, famine and disease. If that wasn’t bad enough The Black Plague was ravaging Europe, killing off massive numbers of people.

A villager returned to Oberammergau infected with the Plague and it started to spread through the town. Facing the possibility of extinction the villagers gathered to pray to God for deliverance from the Plague. They made a promise that if they were spared, they would perform a passion play every 10 years that would tell the story of the last days of Jesus of Nazareth.

From the time they made the commitment, no one else in the village died from the Plague. Those who had been infected recovered from the disease.

Since then the village has stayed true to its commitment for nearly 400 years. That in itself is remarkable. In a world that has become characterized by throw-away products, here is a living tradition, preserved intact, re-enlivened with new interpretations by succeeding generations.

The Lifeblood of the Village

The Passion Play is a huge event in this village, larger than anything except perhaps the mountains themselves. The village is practically consumed by this grand drama. The preparation starts in earnest two years before the play. Rehearsals go on through the cold winter even though it takes place in an open air theater.

It is a huge social affair, uniting the whole village in a common endeavor that is of great importance to the individuals who live in the village. Only those who were born in the village or have lived there at least 20 years can participate, with the exception of some children.

Local people first perform in it when they are small children, and then return to play older roles in later productions. It is theater on a grand scale: thousands of actors, a full orchestra, a performance that lasts eight hours, five hours of theater and a three-hour break for dinner.

Not Only for Believers

It’s an easy mistake to assume that the play would only appeal to true believers of Christianity. But in fact its appeal goes way beyond that. It is fascinating on many levels and most of them are independent of any religious belief.

The story of Jesus has great resonance in itself as a human story, independent of whatever religious implications anyone may bring to it, and those of course vary from person to person.

A movie once described the story of Jesus as “The Greatest Story Ever Told,” and surely it must be one of the most powerful human dramas of all time. One does not have to be a Christian to experience the towering human drama, the struggles, the ideals, the crushing tragedy and then triumph beyond the tragedy.

Completely aside from the story, you could be totally absorbed in the play itself, the production, the sets, the costumes, the creation of the text, the reinterpretation of the story to keep it fresh and thought provoking for contemporary audiences. The production, with its many moving parts coordinated like clockwork to keep the story flowing, is a wonder in and of itself.

The size of the event alone is staggering. This is live theater on the most gigantic scale. It’s like an old Cecil B. DeMille movie acted out live. There are thousands of actors on the stage, and animals as well. The population of Oberammergau is 5,000 and half of them are participating in the play.

You can witness the unique, real-life drama of the village itself, for which the Passion Play is the heart of its local culture for hundreds of years. It is the spectacle of a community working together to be an active part of something they see as larger than themselves. It is an ocean of people who are inspired with passion for the Passion and the play.

There is something deeply stirring in the ancient experience of live theater itself, probably one of the earliest community experiences of humankind. There is an unnameable magic when large numbers of people focus their attention and their energy on a single story, a single point in time. The story can take on a life of its own, brought to life by the energy of not only the actors but also of the audience.

In the Passion Play of Oberammergau, that communal experience is shared by thousands of people present. And the story has a resonance that stretches far beyond the present time and place.

I hope that I can be one of the lucky ones who gets to attend the play in 2020.

On that note, I bid your farewell for now. I wish you all the best, and happy travels.