On the morning of April 1 I awoke in my favorite part in Southern Vermont to find that it had snowed eight inches the night before, placing a soft, fresh layer on top of the crusty snow that had accumulated and hardened over the winter. Then when I returned to the same place in the last week of April, it had transformed almost beyond recognition. It was hard to believe it had changed so drastically in only three weeks.

The snow that had ruled the landscape like a harsh autocrat had vanished completely, leaving only a trashy residue of twigs and branches that had blown down during the winter and lodged in the snow until the big melt left them scattered across the ground.

The two-foot blanket of snow had turned to liquid and sunk into the earth, moistening and softening the ground, and replenishing the springs and wells. The rivers were gushing like powerful engines as they overflowed with the immense volumes of water from the melting snow.

It was magnificent! The raw power of the changes exploding out of the landscape was exhilarating as nature came roaring back from its winter slumber.

That far north the difference between the long, hot days of summer, and the long, dark nights of winter is a long stretch. The distance from the peak to the trough is greater than it is further south, so the change of seasons is faster and more dramatic. It comes with great force.

I was there right at the cusp, that brief moment when the cold regime of winter finally relinquishes its iron grip and vanishes, triumphantly vanquished by the new spring. The king is dead, long live the king.

It had first struck me at the beginning of the drive from New York. As soon as I got beyond the urban environment, where nature is suppressed and veiled, I could see the landscape bursting with new vegetation. What had been dark, naked branches were now sprouting blossoms and new leaves, the first appearance of the green covering that would be the earth’s cloak until the next autumn. 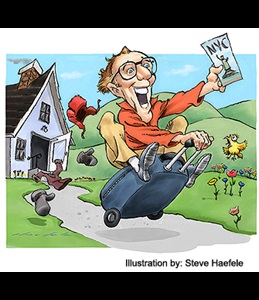 The new growth was still in its infancy. The brown landscape had developed a fringe of green that would soon become a thick layer. The new leaves were light yellow-green, like baby lettuce. Besides the visual spectacle, there was a feeling in the air of moistness, fecundity and fertility. Nature was orchestrating this year’s growth of plants, preparing the earth for the new generation. I could see it, feel it on my skin and smell it in the air.

I could sense the power of nature, that inconceivable immensity that can cause a giant bolt of lightning to rip out of the earth’s surface and connect to the sky. Surrounding me was a vast multitude of creatures reasserting themselves in the newly congenial spring environment, birds chirping, insects humming loudly, earthworms silently preparing the soil.

This radical transformation of the landscape takes place as a vast motion. Like the moving hand of a clock it’s not quite visible to the naked eye, but you can sense a fine vibration like a faint hum in the intense growth. The progress of growth will be visible when you look again the next morning.

The primal energy released during this process is dazzling. It cannot help but transfer some of that energy to your mind and body, which are elevated and charged by the experience. It’s an amazing spectacle that happens once a year and is a great privilege to experience.

As I am sitting at my desk, I feel new ideas and hopes spontaneously bubbling up within me. I wonder, where did that come from? Then I realize. That is spring. The same process is going on inside of me, because I am also part of nature. I feel spring surging up inside me. I feel myself coming alive, renewal. It feels good.

That is spring. That is the spring within myself.

Back in October I had been at the same place in Southern Vermont at the height of the fall change, when it reaches its spectacular peak with the leaves changing to their most flamboyant yellows, oranges and reds, just before they fall from the trees. I see why fall foliage tours are so popular. It’s a beautiful time to see New England. But in a way, spring is even better.

Part of the poignance of autumn is the fact that, while it is a brilliant finish to the year, it is also the death of the leaves. Spring, on the other hand, is birth. It is the jubilation of emerging from the oppressiveness of winter to the time when you can go out without a coat, when it is a pleasure just to be out of doors. As I was experiencing the explosion of spring from the starkness of winter I wondered why there isn’t as much excitement over touring New England in the spring as in the fall.

The new baby is always the favorite.  Certainly everyone loves spring. Spring is the renewal of life. Spring represents the hope that springs eternal within the human breast.

Shortly after the winter solstice we proclaim a new year January 1. We make our resolutions, and then we hibernate. We go into a submerged, meditative existence, waiting out the winter, planning, dreaming. And then spring comes and liberates us. When those first warm days of spring unfold and you can go outside without a coat — that is liberation. It is freedom and new life. That’s when you can take the dreams of winter out into the real world and actualize them.

I feel like an explorer, like Lewis and Clark breaking down their winter campsite after holing up for months waiting for the weather to thaw enough to begin explorations again. Like millions of others I am looking forward eagerly to my summer travel plans. I’m champing at the bit, ready to hit the road.

Spring is the real beginning of the new year. I’m so grateful to have another one.

I hope you are feeling it too, and have begun to move on your spring and summer adventures. Make hay while the sun shines!

Perhaps I’ll run into you on the road. Until then, I remain 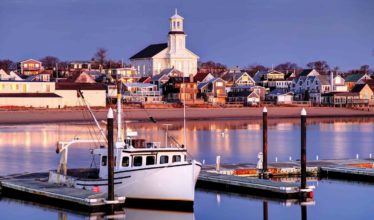 Cape Cod, The Islands and Newport