My Transformation in Nogales

The New Year is here again, every year it comes quicker than the year before. But somehow that holiday still brings the hope that it’s possible to get a fresh start. Maybe the idea that we can start fresh again no matter how old we are is just wishful thinking. But if it’s an illusion I will embrace that hope. And I can make it real by taking action.

For me the best way to wipe the slate clean is to take a trip. It’s like giving your computer a reboot. When you change your environment and all your customary cues, it tends to jog you out of your habits. If it doesn’t break a habit, at least it makes you aware of it. What better way to make changes in your life than to pack up and go, take a trip, change your perspective, open yourself to the wider world and all its influences and ideas?

I was recently discussing these ideas with a friend and he asked, “Have you ever had a travel experience that changed your life?”

I was taken back at first, at a loss to think of a trip that didn’t change my life. I suppose it’s a matter of degree. Not every trip causes as profound a change as a new career or a move from one city to another. But each trip has changed me incrementally. I am the sum total of all of my experiences, but travel has been the greatest agent of change in my life.

Every time I take a trip, I come back a different person. But if it’s a matter of degree, then I asked myself what trip catalyzed the greatest changes in my life? 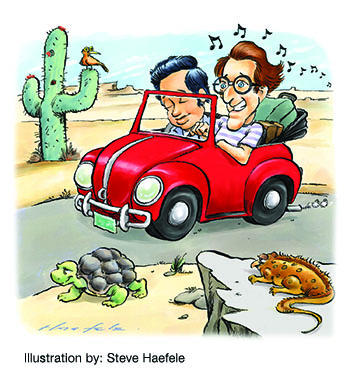 It figures that the earliest experiences would cause the greatest changes, because then you are still impressionable and unformed, with much time left to set the course of your life. But many of my mature travel experiences have also profoundly changed my world view, trips to Antarctica, the African bush, and the Amazon jungle for example.

If pressed to name the single travel experience that most affected me, I think I would have to go back to when I was 16 years old, to my first trip to Mexico. It was my first trip outside of the USA, my first immersion in a foreign culture.

It was the summer between my junior and senior years in high school when the opportunity suddenly fell in my lap. My stepsister’s Spanish teacher, Roberto, had been planning to drive to Arizona to visit his family. The friend who’d been planning to go with him suddenly had to drop out and he needed someone to help him with the driving. I could help and in return get a great trip to Arizona and Mexico.

Roberto was born in Nogales, Mexico, and his family was still living in Tucson, Arizona, not far from Nogales. I had to move fast, but I was able to secure a two-week break from my part-time grocery store job and was set to go. On the appointed day, we piled into his Volkswagen bug and hit the road.

Roberto laid down the rules at the beginning. Never drive the bug more than 65 miles an hour. The plan was to drive straight through, taking turns, one driving while the other slept, only stopping to eat, use restrooms and refill the gas. We took off in the afternoon and drove into the night, listening to AM radio on the little dashboard speaker.

When the sky turned dark and we could see little more than the blue moonlight splashing into the car and the headlights of other cars on the highway, I explored the radio landscape.

He sounds to blue to fly

The midnight train is whining low

And I’m so lonesome I could cry…

​When we got to Tucson we’d been driving more than 24 hours straight. Roberto’s mother and younger sister greeted us warmly and helped us get settled into our sleeping quarters for the next two weeks.

Roberto was only 22 years old and still had a lot of friends in Nogales. Many of them had returned home for the summer from wherever they had gone to school or work. He was eager to see them again, so the next day we headed down to Nogales.

The border that separates the Nogales in Santa Cruz County, Arizona, from the Nogales in the state of Sonora, Mexico, is an imaginary line, but when you cross it, you enter another world.

Growing up in suburban America in the economic boom of the ‘60s I was used to things that were new, including many corporate franchises, with pre-fab, standardized architecture, esthetically vapid, but clean and brand new.

In the dusty border town on the Sonoran Desert the buildings were of an older vintage, a little dilapidated, but quirky and individualized. There were rows of storefronts bursting with individual character, little bars and restaurants, dime stores, farmacias and curio shops where you could buy all sorts of things you couldn’t get back home.

I bought sandals made of tire treads and a switchblade knife, which was a priceless commodity because it was illegal back home. Of course I had absolutely no use for it other than to push the button and watch the blade pop out and show it to my friends.

I got to tag along with Roberto’s friends in their 20s, which for a 16-year-old was a great thing in itself. I was starstruck. Even being in a bar was a new experience for me. I was too young to go into bars at home, but in Nogales it was no problem. No one seemed to notice or care that I was only 16. I enjoyed the strange bar environment with its dim, colored lights and the commotion of people letting loose and enjoying themselves after the day’s work was done.

I had to ask Roberto what to order in a bar. I had no experience with mixed drinks. He recommended a Daiquiri as a good starter drink. It tasted like a soft drink. It was summer and scorching hot, but the drinks moderated everything and things cooled down in the evening.

We went bar-hopping, gathering Roberto’s compadres as we went. It was a raucous time. We were entertained by mariachis, little ensembles of a few men wearing wide sombreros and panchos who walked around playing guitars, guitarrons and animal skin drums, and singing crystalline harmonies to heartbreaking Mexican love songs.

​We danced on the sidewalk while we gave some mariachis tips to play for us. When the money for tips ran low, one of the young women in Roberto’s group announced that she was donating a wad of money her mother had given her for new shoes, so the music could continue on into the night.

Whenever I hear the song “Dancing in the Streets” it takes me back to that time in Nogales.

I learned Mexican songs, practiced my Spanish until I became somewhat fluent on the most primitive level. I learned a little bit about how they danced, got a lot of practice and even learned how to do the long yell that would sometimes punctuate their songs: “Aaaah Hah!”

At age 16 I was adaptable and impressionable, and within a few days I felt like a native. It was like being immersed in some kind of rich fluid, being marinated by it, becoming part of it, so that even after you are pulled out, it has changed you, changed the flavor of you.

I didn’t want to leave. Returning to my familiar environment in America felt strange. I went back to the same house, the same school, the same part-time job, the same car. But inwardly I was greatly expanded. My horizons, my sense of possibility had been stretched immeasurably. It established solidly and irrevocably the burning desire to travel as much as possible, to see more of the world, have more of the kinds of wonderful experiences I had had in Nogales.

That time travel profoundly changed my life, and it has never stopped.