Mark Twain’s first book and his best-selling book during his lifetime, was a travelogue called The Innocents Abroad, describing a cruise in 1867 to Europe and the Holy Land, which included a visit to Egypt. The five-month “pleasure excursion” on a retired Civil War ship rechristened Quaker City is said to have been the first packaged cruise offered in America.

The 31-year old Mark Twain, who could make a laughing stock out of the most revered traditions of Europe, was uncharacteristically subdued at the Plateau of Giza. Rarely at a loss for words, he admitted his failure to adequately describe the sheer massiveness of the Great Pyramid.

I could conjure up no comparison that would convey to my mind a satisfactory comprehension of the magnitude of a pile of monstrous stones that covered thirteen acres of ground and stretched upward four hundred and eighty tiresome feet, and so I gave it up and walked down to the Sphinx.

When he confronted the Sphinx, the comedic narrator was disarmed. His quick sense of humor temporarily abandoned him as he stared in awe at the gigantic limestone sculpture, the enigmatic, timeless face, and struggled to conceive of the passage of 5,000 years. It caused him to reach into the depths of his being and pull forth some of the most eloquent and moving description he ever produced. 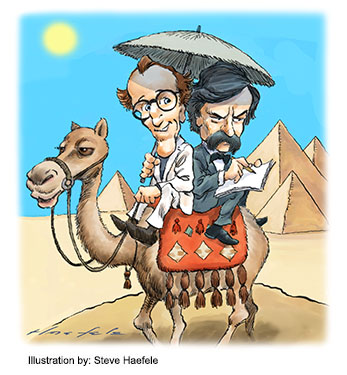 The great face was so sad, so earnest, so longing, so patient. There was a dignity not of earth in its mien, and in its countenance a benignity such as never anything human wore. It was stone, but it seemed sentient. If ever image of stone thought, it was thinking. It was looking toward the verge of the landscape, yet looking at nothing—nothing but distance and vacancy. It was looking over and beyond everything of the present, and far into the past…

It was thinking of the wars of departed ages; of the empires it had seen created and destroyed; of the nations whose birth it had witnessed, whose progress it had watched, whose annihilation it had noted; of the joy and sorrow, the life and death, the grandeur and decay, of five thousand slow revolving years.

This is not the whimsical Mark Twain of “The Celebrated Jumping Frog of Calaveras County.” This was the Sam Clemens who had seen the death of his beloved 19-year old brother while working on a Mississippi riverboat; who lost two other siblings while still a child; who had been so frail and sickly as a child he was not expected to live; whose father had died leaving the family in dire straits and forcing him to go to work at age 12.

This was a man intimately acquainted with tragedy, which he gently alluded to as he reached for words to describe his encounter with the Sphinx.

Who knows how much that experience influenced his writing for the rest of his life? As great a talent as he was, the fine prose that the Sphinx pulled out of him would have never left his pen had he not seen the Sphinx. And once his mind had been stretched to accommodate that experience, it would never, as is said, return to its former dimension.

There are still so many mysteries about the Pyramids and the Sphinx. We don’t really know how they were built. It has been estimated that the Great Pyramid, only one of the three, is constructed of some 2.3 million blocks. Some of the heaviest granite stones weigh as much as 80 tons each, and they are believed to have been brought from Aswan more than 500 miles away. How were they transported, and assembled?

The white limestone covering at the top of one of the pyramids and around the base shows that before an earthquake in 1303 knocked of much of the covering they were smooth and shiny.

And there is the mystery of signs of water erosion on the Sphinx which baffles archeologists because the area has not been wet for 10,000 years. Could it be that the Sphinx is even older than previously thought.

There are endless mysteries that confront you when you see these things. An Egyptologist guide can tell you much about what it known. But there is still much about these great monuments that is unknown.

The experience of seeing the Pyramids and the Sphinx is by itself one of the greatest experiences a human being can have. That alone is worth the trip to Egypt. It will change you.

Only Mark Twain could be Mark Twain, but for each of us in our own ways, confronting the Sphinx and the Pyramids will stretch our being to new depths. It cannot fail to do what it has for countless others through the ages. Egypt is the original tourist destination, the ultimate bucket-list experience.

It is a priceless, unforgettable experience that will never leave you. Perhaps it is a cliché, but I heartily endorse it: Everyone should see the Pyramids and the Sphinx at least once in their lifetime.

While I am raving that Giza itself is worth the trip, I don’t mean to give the impression that it is all there is. It is only the beginning of what there is to discover and experience in Egypt. And new discoveries about antiquity are being made every year.

Up to Upper Egypt

It’s not possible for a mortal human being to even sweep over the best of Egypt on a single vacation. When I start trying to catalog the great experiences of Egypt I go cross-eyed, and the mind, like the Nile, runneth over.

The monuments of Upper Egypt give the Sphinx and the Pyramids a run for their money in terms of impact. The gigantic seated figures at the Temple of Abu Simbel are some of the most fantastic colossal creations of any culture.

Looking up at them from their feet places one in the perspective of a mouse. To the extent that you can comprehend what your senses are showing you, you can gaze in wonder that such a thing could exist, that human beings somehow gathered the wherewithal to produce something so grandiose and magnificent.

There are countless more temples in Upper Egypt, in Kom Ombo, Edfu and Luxor. There’s Nefertari’s tomb in the Valley of Queens, with its dazzling, colorful murals. There are modern wonders too, such as the Aswan High Dam, a tremendous feat of modern engineering undertaken in the 1950s.

There’s rich early Christian history in Egypt. And there’s the living spectacle of life in Egypt today, the markets in Cairo, the juxtaposition of ancient and modern.

And then there is the great Nile, the great artery of the earth that provides the lifeblood for the Egyptian civilization. A river cruise is a great experience just for the physical pleasure and natural beauty. But in this case there is the fact that this is the Nile, the mighty body of water that has figured so deeply in the history of civilization.

As a tourism wonderland, Egypt is fathomless. You can’t hope to assimilate it all, but the basic experience of Egypt is something everyone should have at least once in their lives.

Perhaps the greatest gift to us from Egypt is the gift of mystery, of knowing that there are mysteries that will never be known, never be penetrated and explained.