Every December I look forward to the time I can pull out the video of a 1951 English movie called “Scrooge.” It’s a cinematic retelling of Charles Dickens’ “A Christmas Carol” starring a charming Scottish actor named Alastair Sim as Scrooge.

For those who don’t know the story, it’s about a mean old miser who is visited by three ghosts and undergoes a spiritual awakening, changes his ways, and becomes a kind and generous man.

Watching this old movie is an annual ritual for my family. We’ve watched it so many times together we can practically recite the dialogue as it plays. But we don’t get tired of it. We put it on and willingly go under its spell. We let it transport us into its little world. For me it’s almost like piece of scripture that I can return to repeatedly and always feel inspiration from it.

I think the reason I like it so much is because the story reaffirms values that I sometimes feel have gotten lost in the wild intensity of today’s world. When I see these old ideals portrayed so lovingly by Dickens, cast and crew, it reminds me that those values do still exist and are indeed revered by many people. Since Dickens was moved to write the story way back in 1843, I have to assume that he already had some of the same concerns way back then. Somehow that gives me comfort. 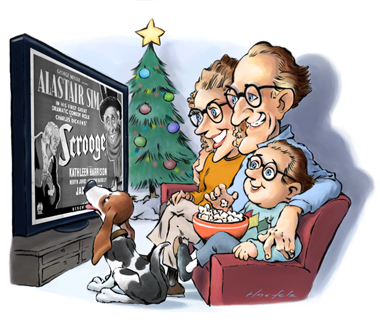 One particular scene in the movie well defines the values that resonate with me so much. In that scene we see a rapidly modernizing London undergoing the powerful waves of change of the industrial revolution, with big financial interests buying up smaller businesses and moving them into a new era. We see a slick and shady character named Jorkin talking to a business owner named Fezziwig about selling his business.

Fezziwig runs the business where Scrooge had his first job. He is a kind man, generous with his employees and loved by the community.

Jorkin says, “Mr. Fezziwig, we’re good friends besides good men of business. We’re men of vision and progress. Why don’t you sell out while the going’s good? You’ll never get a better offer. It’s the age of the machine, and the factory, and the vested interests. We small traders are ancient history, Mr. Fezziwig.”

Fezziwig draws back and says, “It’s not just for money alone that one spends a lifetime building up a business.”

Jorkin snickers, shaking his head at the quaint, old-fashioned ideals of Fezziwig.

“Well if getting rich is not why you spend a life building up a business,” he says, “I’d like to know what is.”

Fezziwig tells him: “It’s to preserve a way of life that one knew and loved. No, I can’t see my way to selling out to the new vested interests, Mr. Jorkin. I’ll have to be loyal to the old ways and die out with them if needs must.”

To preserve a way of life that one knew and loved. Yes!

A Way of Life

It comes down to the attitude with which people conduct business. We often hear of someone starting a business, building it up and then having a public offering, cashing out and getting rich. It often seems that getting rich is the ultimate goal of everyone and everything.

I have heard people justify shady, dishonest business practices by saying “it’s just business,” and I can’t agree with that. I can’t believe that nothing else matters but the bottom line.

I don’t think I am the only person who is weary of the attitude that the Almighty Buck is the ultimate value in the world. So when I hear of companies that aspire to higher values it makes me happy.

It is the old-fashioned attitude of Fezziwig, that a business is much more than just a way to make money, that first attracted me to Tauck and so impressed me many years ago. I’m not writing a sales pitch for Tauck, but this was something I observed as an independent writer and observer of the travel industry.

As I observed the travel industry, Tauck emerged as the company that for me best exemplifies the idea that there are certain values that are much more important than quarterly reports.

Tauck is a private, family-owned company with a history dating from 1925 of successfully employing its core principles to build a company. Since it is not a publicly held corporation, it is not held to the fiduciary mandate of corporations to maximize shareholder value to the exclusion of practically every other concern.

The principles discovered and employed by its founder Arthur Tauck Sr. in the company’s earliest days have served the company extremely well and yielded decades of successful and profitable operations. Because the company is solid financially its people are able to raise their sights to higher values. Tauck is able to focus on its mission of providing transformational travel experiences for people, and to let the bottom line take care of itself as a byproduct of the successful implementation of the higher vision.

Tauck’s embodiment of the values expressed by Fezziwig was demonstrated most vividly to me in the moments after that horrible time we refer to as 9/11.

At the time, as you no doubt recall, the country was terrified to the point of paralysis. The travel industry in particular was dealt a staggering blow. People were afraid to travel, afraid to even get on an airplane. The travel industry ground to a halt. Almost no one was willing to make a move. People and companies hung back and waited for someone else to get things rolling again, as if hoping they might wake up and find it was all a dream.

For many travel companies it was an existential crisis. Every day of inactivity their losses mounted and for many companies their very existence was threatened. No one had ever experienced anything like what was happening and most people were too frightened and confused to move.

With their revenue streams suddenly cut off and no clear relief in sight, most companies cut every cost they could. They laid off employees, and cut advertising and marketing expenses.

In that moment, Tauck distinguished itself from the crowd. The company had a long history and deep traditions to draw on in such a time of uncertainty and fear. It became one of the first companies to stand up and move forward in those moments when Americans were trying to shake ourselves from paralysis and take the first steps toward rebuilding.

The industry and the world needed leaders to point the way toward how to get started again. Tauck stepped forward boldly and took the leadership mantle.

The company’s first concern was of course to get everyone safely home who was traveling with Tauck, some 8,000 people. The people at Tauck also did everything they could to accommodate the concerns of their customers who were afraid to travel in the terrifying aftermath of the attacks.

Tauck exercised the same kinds of customer care principles that it does in the normal problems that tend to surface on any trip. But this time everything was on a much greater scale than ever before.

To make its customers feel as good as possible under the circumstances, Tauck went way beyond its obligations to accommodate the wishes of its customers, and in doing so took millions of dollars of losses.

Tauck was able to do that because not only had it built the financial wherewithal to withstand such a shock, it had also proven through its history that its highly developed sense of customer care, the art of making its customers feel cared for, would always ensure the company’s success in the future.

Next, the company did not lay off employees or cut back its marketing efforts as most companies were doing at the time. Rather it picked itself up and went right back to business as usual. In doing that, Tauck encouraged others to do the same. Eventually the chill thawed and the world of travel got moving again. That’s how leadership works. As I observed it, it was one of those moments, just like in the movie, that reassured me and made me feel good inside.

Over the long haul Tauck’s actions during that crisis would help to establish it more than ever before as a reliable, trustworthy company that was strong enough to “do the right thing” even at a time when it would have been impossible for most companies to do what it did.

And so with that in mind, I would like to wish you the happiest of holiday seasons. No matter what religion you observe, we all understand the importance of love and kindness.

God bless us everyone!

Until our next meeting, I remain,