It was in the early days of having a GPS that I first noticed a change. I was on my way to a New Year’s party. I wasn’t familiar with the area, but I had typed it into the GPS so I was sure of making it. That thing would get me there one way or another. If I made a wrong turn, it would recalculate and get me to my destination from wherever I was.

I was running late and I got a call from my host. He asked whether I had passed a certain point on the route, and I drew a blank. I had no idea where I was. I was just following a series of directions. I didn’t memorize the directions or even write them down. The GPS would give them to me at the appropriate time. I had no need of doing anything but following the next instruction to “turn left” or “turn right.”

But it was odd to realize I had no idea where I was. I was like a child in the back seat, or an animal on a leash. I had been reduced to following a simple series of commands. That’s when I realized there were some drawbacks to the GPS. I guess there is always something lost with everything gained.

Socrates worried that the written word would impair memory. In his time orators used memory techniques to memorize huge speeches. People carried literature in their heads. Printing allowed us to rely less on memory so we don’t develop it as much. 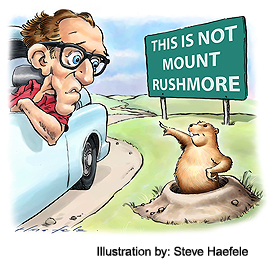 But who is complaining? Printing brought so much of value.

John Philip Sousa feared that the phonograph would “shrink the national chest” because people wouldn’t sing anymore. There was something to that. In, Cuba, where they don’t have recorded music everywhere, most music is live. And Cuban musicians are some of the most focused I have ever seen.

I went to school before PCs, and even before handheld calculators. We were trained to memorize multiplication tables, and for the rest of our lives, whenever we wanted to do a simple multiplication problem, the answer was sitting there in our memory banks waiting to be plucked.

But in the 1970s came cheap handheld calculators, and suddenly the power of a big adding machine was at everyone’s fingertips. Most people forgot how to do math in their heads, or never learned.

There is a moment when you make a decision whether to pick up a calculator or do a calculation in your head. When you start reaching for the calculator, you change the mental circuit by which you seek answers. If you always reach for the calculator instead of making the effort to think, that mental function goes dead.

Isaac Asimov wrote a story about a future when an old school janitor is seen as a marvel because he can figure out math problems in his head. We seem to have reached something like that, where we become helpless without our machines to do what people used to do themselves.

When I am in familiar terrain my knowledge of the environment is supported by multiple impressions stored in my memory over years. I’ve traveled up and down my neighborhood streets practically every possible way. I’ve seen them from different directions, and those images form a composite in my mind, a mental model that allows me to experience the place from multiple views.

My mental map, like a Cubist painting, is a model of the space independent of a fixed point of view. I can sense the totality of the space. That’s what it means to know a place “like the back of my hand.” When I use the GPS, I’m not using those functions. I’m not building my mental maps or my familiarity with the environment. My awareness shifts from the environment to that little screen, from looking outside of the car to keeping my mind focused inside the car. Isn’t that a large part of the joy of travel?

Inuit navigators at the remote island of Igloolik in northeast Canada are able to navigate even though compasses don’t work well close to magnetic north, visibility is often zero, the land can all look the same when covered with snow and the weather is so harsh that mistakes can be fatal.

The Inuits get clues to location by observing not only stars and landmarks, but environmental features such as wind and the drifting of snow, water currents and animal behavior. Through years of experience they develop complex mental maps that give them mastery over navigation.

When the Inuits got GPS it gave them some advantages in navigating through snow whiteouts and fog. But sometimes a battery would run down or the GPS would give the wrong information leading to disaster. After a while it was noticed that the young hunters were losing the ability to read the natural signals. The GPS disrupted the navigators’ mental mapping. They lost their intimacy with the environment.

By now reports of accidents from GPS errors are piling up. People have driven into lakes when their GPS map showed a road that didn’t exist. Truckers have run into overpasses while paying attention to their GPSs. One driver just missed being hit by a train while looking at his GPS instead of his surroundings.

Faulty GPS maps have directed so many people looking for Mount Rushmore to a place 13 miles away that someone put up a sign: “This is not Mount Rushmore.”

Recently I was looking at my GPS and suddenly I was pulled over by a cop. It was a road I had driven many times, but I was paying so much attention to the GPS I had gone through a stop sign without even seeing it.

When we adopt a new technology, it changes the circuits of our brains and behavior patterns. When Marshall McLuhan said, “The medium is the message,” he meant that media are not just neutral carriers of information. They change the way we think and experience life.

Nicholas Carr, the author of The Shallows: What the Internet is Doing to Our Brains, believes the Internet is causing us to lose focus and the ability to concentrate, as we are submerged in a chaotic tidal wave of information.

But Jonah Lehrer, author of How We Decide, who reviewed Carr’s book in the New York Times, cites research showing that the Internet also enhances some mental processes. And no one doubts that access to information can be immensely empowering.

So it is not black and white. It is undeniable that new technologies and tools have drawbacks. There will be trade-offs for every new technology we adopt. Maybe the question should be: How do I use this new technology in a way that enhances my life but does not diminish it? The answer is not so simple.

I don’t want my GPS to turn me into a sheep led around blindly. But I do want to use it to find places when I need it, and to gauge my time. So how do I balance it?