Geography: Where on Earth Am I?

In 2014 three countries in West Africa were struck with an epidemic of the lethal virus Ebola. Although it only took hold in three small countries, it devastated the tourism industry on the whole continent of Africa for more than a year.

The reports of the disease were horrifying. But it had no bearing on my plans to travel to Africa that year because I knew I would be as far from Ebola when I was on safari as I was at home in New York. I knew this because I had been to Dakar, Senegal, in West Africa as a half-way stop on a flight between New York and Johannesburg, South Africa.

That’s right, halfway. Dakar is only halfway from New York to Johannesburg. Kruger National Park in South Africa, where I was going on safari, was actually farther from the Ebola area than I was at home. The same was true of the safari areas in Kenya and Tanzania. But few Americans would go to those countries that year. If you did go, you were likely to have things pretty much to yourself.

Ebola didn’t scare people away from Europe, even though Europe was actually closer to the affected regions than East and Southern Africa were. There were even some cases of Ebola in France, as well as in the U.S. But it didn’t register with tourists the same way. Those places aren’t in Africa.

Because of the unfamiliarity with geography most Americans who might have traveled to Africa that year put it off. It practically destroyed African tourism, pointlessly, and it caused many people to miss out on great trips they could have taken. 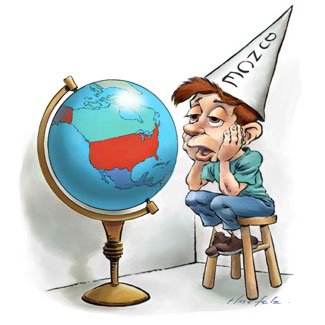 The lack of geographical understanding is frustrating for the people who make a living in Africa tourism, because they feel that any time Americans see any kind of bad scene on TV anywhere in Africa, they avoid the whole continent.

In America geography is no longer a fundamental building block of education as it once was. That is particularly problematic in a world where electronic communications and international air travel have brought us all face to face with each other in a “global village.”

We are more involved with other countries than ever before, economically, culturally and politically. In 1950 the chances of an American traveling overseas were small. Even the chances of using a product made in another country were small. But now the rest of the world is in your face all the time, and it becomes increasingly important to learn about it.

Unfortunately, geography seems to have dropped out of the curriculum in American schools. In 2013, only 17 states required a geography course in middle school and only 10 states required one to graduate from high school.

In 2006, three years into the Iraq War, National Geographic commissioned a study and found that 63 percent of American high school students couldn’t locate Iraq on a map of the Middle East, and 70 percent couldn’t find Iran or Israel. It was two years after a tsunami in Indonesia was all over the news, but three fourths of America’s high school students couldn’t find Indonesia on a map.

A National Geographic study in 2002 of Americans aged 18 to 24 showed that only 17 percent could find Afghanistan on a map even though the U.S. launched an invasion of the country that year. The relevance of the location of a country that your own country is at war with is obvious, but 11 percent of the group could not even find the USA on a map.

You would have a one-in-three chance of landing on the Pacific Ocean if you touched a spinning globe blindfolded, but about a third of those tested couldn’t even find that. A whopping 65 percent couldn’t find France. Sixty-nine percent didn’t know where the United Kingdom was.

The survey polled more than 3,000 18- to 24-year-olds in Canada, France, Germany, Great Britain, Italy, Japan, Mexico, Sweden and the United States. The U.S. came out at the bottom of the list, save one: Mexico.

The fact that we are raising a generation of Americans who have no idea where they are in relation to the rest of the world has disturbing implications for the future of America, but it’s also just sad to see so many Americans missing the fun of geography that comes naturally to people who travel.

I adore maps and find them endlessly fascinating, especially true when I’m looking at a map of a place I am visiting. When you are actually experiencing a place, the map suddenly comes to life, and is no longer just an abstraction. It is a way of gaining an overview of where you are.

When you have direct experience of a place, it ignites your interest in your surroundings and suddenly you have a much greater grasp of its geography. When you spend time in a place, you don’t just learn its geography by rote, you live it. It is embedded in your experience and you have solid, tangible memories of it.

I’ve heard it said that being educated doesn’t mean knowing everything, but rather knowing how to find out. So when a place becomes relevant to you, either because it is in the news or because you are traveling there, you can get hold of a map and suddenly look down upon the place as the gods see it.

This is where, once again, travel reaps great benefits. To a kid looking at textbooks in school, geography may not seem to have much relevance. But when you travel to other countries, geography becomes fascinating. People who want their children to know something about the world should take them traveling. Then the interest will grow of its own accord.

There is no better way to learn about geography than to actually go places and experience them. When you have walked those streets yourself, you get a full-sensory experience that is about as different from looking at a map as talking to a Lincoln penny is like talking to the real Lincoln.

Maps create the conceptual ordering that helps you understand the geography you are experiencing. But it is the actual experience that implants that understanding firmly in your memory.

When a place suddenly becomes more relevant, either because of something in the news or because I am traveling there, I return to the map, and I find that it always surprises me. Though I carry a vague picture of the map in my head, when I look at the real map, there are always things I haven’t noticed before. There is always more to learn.

Geography is the whole world.

On that note, on this December night, as we glide through the holiday season, I wish you the very best of times and the most rewarding of travels.