Finding Myself in the Animals

When I was growing up, there were always animals around. My parents had a Springer Spaniel named Debbie, who seemed enormous, and a grouchy orange cat named Rudolf, who was almost as big as the dog. At my grandfather’s farm I saw chickens, cows, horses, cats, dogs and wild animals too, birds, snakes, raccoons and deer.

My friends and I spent days exploring the nearby creek, where we found crawfish and snakes and other micro-wildlife. I had lizards and turtles as pets. But when I entered adulthood my ruling passion was traveling, so I didn’t want pets anymore. They tied you down. Ironically though, travel brought me back to animals.

My awakening was my first African safari. The experience of seeing the great animals of Africa in their natural environment opened brand new realms of awareness to me. And as Oliver Wendell Holmes, Jr. said, “A mind that is stretched by a new experience can never go back to its old dimensions.”

It seemed to me that I was seeing life with clear eyes for the first time. I could better understand life in civilization after I had experienced life in its natural state. The city was, after all, built in the wilderness.

Caged lions in zoos looked unnatural waiting for feeders to toss them some meat. In documentary movies, there was always a narrator framing the animals’ behavior in terms of scientific theory: “The lion fights off competing males to assure his genes will be the ones to populate the next generation.”

But when I saw lions in the wild, their genes seemed to be the last things on their minds. Those theories are fine as theories, but when you are in the wild the real thing far exceeds any theories or explanations. 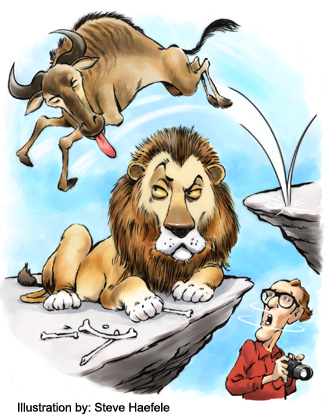 On my first Kenya safari, I joined an early game drive and before the dawn we came upon a trio of cheetahs, feasting on the steamy carcass of what moments before had been an eland. A loud crack pierced the air and sent a twinge of dread down my spine as one of the cheetahs’ mighty jaws cracked the antelope’s skull.

This, I realized, is the existential daily life of predator and prey on the high plains of Kenya. In an instant my world view was realigned. I think the experience of the wildlands awakened instincts that are lodged deeply in human DNA but remain dormant until they are triggered by an appropriate cue. But once those instincts have been aroused they become a part of your experience. The civilized world would never be quite the same to me after that.

The beauty of the African panorama itself is more than enough reason for traveling there. I saw herds of zebras, grazing, running and kicking their legs like wild horses. There was a caravan of elephants with huge, slate-colored bodies moving hastily across the countryside. Magnificent giraffes towered over every other animal, and yet were serenely graceful when cantering with their elegant, rocking gait.

Gazelles and impalas danced on light feet like ballerinas. The massive, muscular bodies of the rhinos were the very expression of power. The warthogs, with their huge heads and small bodies were comical, but deadly. And the lions, the most regal of the beasts, have an unmistakable royal bearing and look upon the rest of the world with an air of disdain.

And then there were the wildebeests. I saw them as ragged, homely creatures. My guide said “God made them from spare parts: the head of a bison, the stripes of a zebra, the body of an antelope, the hairy mane and tail of a horse, goat-like beards on their chins.” Just a dumb herd animal, I thought. I scanned over them like grass as I watched for something more interesting.

But in spite of myself I began to notice them. Gradually they broke down my resistance and began to charm me. First I noticed that they ran with elegant grace. A wildebeest may look ugly in a still photo, but in motion it becomes a thing of beauty.

As I watched them running I couldn’t deny that they were having fun. They were playing, dancing and running in what seemed to be a celebration of movement. Films I had seen framed their activities in terms of the “struggle for survival.” I had never thought of wildebeests having fun. But when I saw them in person, there was no doubt that they were.

Then I observed something that endeared me to the wildebeest forever. As we crossed the plains in our Land Rover, we saw a lion walking up a broad incline. Up ahead I saw a wildebeest. And — bizarrely — it was walking straight toward the lion.

This defied my expectations of how wildebeests should behave. Surely suicide is not standard wildebeest behavior. But in this case, I did a double take and a triple take and there was no doubt. This wildebeest was walking directly toward the lion. I couldn’t imagine why.

When the wildebeest got about 30 feet from the lion, it turned its body sideways and shuffled its feet as in a dance step, with its face turned directly toward the lion. The wildebeest was taunting the lion! It reminded me of Muhammad Ali doing the Ali Shuffle.

I couldn’t believe what I was seeing. How did that behavior fit into the scientific rule book of how wildebeests are supposed to behave? But it happened, and I fell in love with that feisty wildebeest. It expanded my view of the possibilities of the world. I am grateful to that wildebeest for being my teacher, a guiding light demonstrating the kind of spirit I would like to be able to demonstrate in this life.

My guide said the lion probably had a full stomach and the wildebeest knew it would not attack. Still, it was a great show of defiance and spirit. I would never have thought such a thing possible if I hadn’t seen it.

After that I saw many incidents of animal behavior that seemed to defy the rules. One day I saw lions feasting on a buffalo and the next day I saw a buffalo chasing lions. The food chain seemed to forget itself sometimes. The best thing I learned in the bush is that nature constantly defies our expectations.

Once I realized that nature doesn’t adhere to our rule books, I saw more and more wonders. It broadened my appreciation of all animals, whether wild or domesticated. After seeing the big cats in the wilderness, I saw my little housecats differently. I could see their noble family connection to the mighty felines of Africa and it gave me new respect for them.

Travel has brought me into close contact with animals in many places and situations, and they have become increasingly important in my travel experience. Now I see the behavior of people within the context of the animal kingdom, and it helped me to understand us and how we fit into the world.

So to all my animal-friendly friends (who stuck with me this far), I wish for you the best travel experiences. And watch out for the animals!