On some trips I like to travel independently, but when I want to really discover a new destination I like traveling with a professional tour operator who can take care of all sorts of things I know nothing about and guide me to the best possible experience of the place.

Traveling with professional guidance gives me the benefit of the experience of someone who has trod the path many times and can assure me that I can relax and enjoy the ride, knowing I can trust them to take care of everything necessary to make the most out of my precious vacation time.

One problem with that, however, is that when people buy a travel package they sometimes expect it to be as standardized as a box of Tide off the shelf at a grocery store. The word “package” is a little strange in the context of travel.

In travel, the word “package” means a combination of two or more elements, such as airfare, hotel accommodations, admissions and tour guides in a single purchase. But it does not imply uniformity. Every package of Tide is virtually identical, made up of thousands of tiny particles that are all indistinguishable from each other.

Trips aren’t like that. There is no such standardization possible. Every place is different, every hotel, every room, every meal and every day’s weather are unique things and events, and subject to change and variance that is beyond the control of human beings. 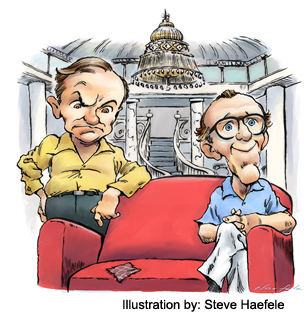 This can be a problem for people who expect a tour package to be a standardized product. It may be standard to the degree that it is humanly possible. But a tour package cannot have the same kind of uniformity as a package that rolls off a conveyor belt in a factory.

There are hundreds of people involved in handling the many details of your trip, including local guides, drivers, waiters, chefs, hotel clerks and housekeeping people. But although there is a virtual army working to make things right for you, sometimes in even the most professional operations there are lapses, times when things don’t rise to your standards or those of the tour operator, the hotel or the restaurant. Sometimes something will go wrong. That’s just life. But when I am on a trip I do my best to not get so bent out of shape over one bad thing that it fouls my mood and I can’t enjoy all the other things that are there for me to enjoy.

I recall one time when this principle smacked me in the face with particular vividness. I was on a themed tour of places where some of the great composers had lived, including Vienna, Prague and Budapest. It was during the ’90s and the countries that had been part of the Soviet Union before it collapsed were struggling to develop after decades of economic stagnation.

It was exciting to see Prague, which had been hidden behind the so-called Iron Curtain for decades, out of the reach of western travelers. In the ‘90s Prague was humming with the triumph of its Velvet Revolution of 1989 when the people had thrown off the Soviet occupation that had gripped the country since the 1940s.

Unfortunately after 40 years of exploitation and domination by a foreign power, Czechoslovakia’s infrastructure was dilapidated and not up to the standard that Americans were used to. Getting a first rate hotel in Prague by the standards of Western Europe or the U.S. was not possible.

But it was Prague! It had been hidden for so long and now it was open and full of hope and the promise of freedom. The gorgeous old buildings of Prague were grand and well preserved and there was excitement in the air. Prague had its John Lennon wall, where people had nursed their belief in freedom during the dark days of Soviet occupation, and now it had become a symbol of the triumph of freedom against oppression.

Unfortunately I have found that negativity can sometimes spread through a group like an infection. Something must have gone wrong with one of the travelers, I’ll never know what. He was recently divorced, traveling with his new girlfriend and intent on impressing her. For some reason he got it into his head that the tour package was not up to standard and not worth what he had paid for it.

He started grumbling at everything. As we drove past the luscious landscapes of the newly opened Eastern Europe, he kept his nose in the Wall Street Journal, not looking up except to complain about every meal, every stop and every hotel.

He had brought along an old high school buddy who was traveling with his wife, and soon the negativity spread to the friend and he too started finding things to complain about. The second grumbler explained to me as we stood in a hotel why he was joining his friend in the complaint brigade. We were standing in the lobby of a Prague hotel near a couch that was a bit threadbare. He pointed to the couch and said, “In New York a hotel like this would be third rate.”

Uh huh, I thought. Of course! But this is Prague, not New York. If that was what you wanted, why did you leave New York? You can’t go to exotic destinations and expect everything to be at the same standard you are used to at home. If you could, what would be the point of traveling?

There are tour operators today who have raised their standards to such a high level of professionalism that I know I can count on them to not only secure my safety and comfort, but to direct my trip as though it were a piece of performance art and deliver to me a mind-altering experience. What they can bring to a traveler, the degree to which they can enhance the experience is almost like magic.

But they are not magicians. They are professionals with highly honed skills for mastering the problems of travel. But there is a limit to what they can do to control events.

If traffic jams could be completely eradicated, they would be. But they won’t be in the world as we know it. Perfection is only an idea, it does not exist in the real world. And that fact – novelty – is central to the thrill of travel, and the thrill of living itself.

A tour operator may design the most perfect itinerary ever devised by humankind, but some days it rains. If it does, it will affect the way the itinerary plays out in real life. The itinerary is a plan, a recipe. But its elements, its ingredients are not fully under human control.

When you buy a travel package, you can’t expect a standardized package like a package of Tide. Travel is partaking of the real world on its full scale. That means taking things as they are. Sometimes there are traffic jams, bad weather. Sometimes things go wrong.

Taking a Chance on Travel

Why do you get an urge to travel? It may be hard to define the reason, but most people do get that urge. And why? To discover new things, a wider world. To expand one’s horizons, live more fully.

There may be better ways to describe it, but these are the kinds of things people will say if you ask them why they travel. People travel to get out of their routines, or ruts, to see new ways of thinking about things.

The desire to experience new things goes against our normal desire for safety, sameness and predictability. Some of it is just inertia. There is a part of me that just doesn’t want to be bothered with anything changing. But we get stale if we do the same things in the same place all the time. So, we get the urge to travel.

So even though a tour operator can smooth over many of the disturbing vicissitudes of travel, no mortal can control the elemental forces of nature. Sometimes things go wrong.

The best attitude when things throw off your travel plans is to just go with the flow, recognizing that things happen and there is no perfection in nature. There is always the possibility of things getting fouled up.

But in the end, that is part of the fun of it. Isn’t it? How dull things would be if everything always went as expected!

So on that note, in praise of the unexpected, I will leave you to pursue your own search and reap your own harvest.

Until we meet again, I remain,