America is vast, almost more gigantic than we can imagine. As large as it is in its physical dimension, that is only the beginning. Even if you begin to get a handle on its physical scale, its layers of multicultural richness, its geological and biological diversity, you still have yet to approach the metaphysical dimension of America. You can read the Gettysburg Address at different stages of your life and continue to find new levels of meaning whenever you return to it.

What did Lincoln mean when he talked about “a new birth of freedom,” and that the hope that “government of the people, by the people, for the people, shall not perish from the earth”? How radical and bold a vision was that in 1863? Only late in life am I beginning to understand the preciousness and fragility of what he was trying to maintain throughout that awful struggle.

After you spent a lifetime trying to get your mind around all of that, America would have changed drastically and you might still be struggling to figure out what changes, and what endures from century to century. 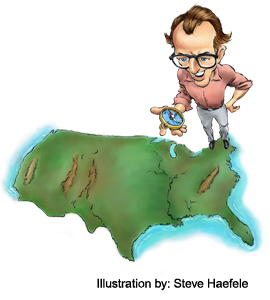 The subject of America is bigger than anyone was ever able to effectively define. But that need not stop us from trying. The fascination of America is constantly renewing itself. It is a never-ending story, one that embodies great contradictions, such as the fact that some of the men who founded a new kind of country based on the belief that “all men are created equal” were slaveholders.

It is an epic that embodies both evil and good, as if all of the forces of the world met on this continent to have it out. Certainly any attempt to approach an understanding of America must begin with a study its history.

There is no better way to come to grips with the reality of history than to go to the places where history happened. A father who took his kids on a family tour recently told me he thought they had progressed a year’s worth during one week on tour. “They really got into the history,” he said. “At school they are just looking at books, but on tour history was right there.”

A historian guide at Gettysburg can walk you around that hallowed ground and show you specific patches of earth where events took place that would determine the future course of America. Such guides are a unique breed, so passionately immersed in their subjects that they can almost wipe away the veil that separates you from what happened at that place decades or even centuries ago.

Your Discovery, Your America

I was a bewildered child when I first heard that Columbus discovered America, and was greeted by people who already lived there. I could make no more sense of that idea than most of the other things I was told as a child first piecing together a crude world view.

Later I learned that the Vikings had been in America before Columbus, and maybe others too. At first I thought that “discovering” something meant you were the first to see it. I now realize that discovery is new for every person every time.

When you look upon the Grand Tetons you are transported, and you know you have arrived at a place that has been visited by others.

As infinite and multi-dimensional as America is, the ways to experience it are just as numerous. You can approach from practically any point and follow the trail of whatever interests you. You can start where you are and go wherever you feel like going. Infinity has no beginning or ending, and every point is the center.

If you reach a point where you are beginning to make out larger shapes behind the disparate pieces, then you might wish to try a more systematic approach to seeking the essence of America. Many of the greatest minds have tried to sum up the essence of America, and no one has succeeded in capturing more than part of it. Even so, the pursuit of that understanding is endlessly absorbing and worthwhile.

So where to begin?

You may find yourself agreeing with historians who say that the founding of the new nation that began with American Revolution was only completed with the Civil War. As Lincoln said at Gettysburg, the nation was only fully consecrated as an institution dedicated to freedom through that terrible struggle.

There you have the foundation. But by the time the young country had come through the Civil War, it had transformed again and a new industrial America had been born out of the war.

As soon as you think you are getting a fix on it, America has transformed again and evolved into something else from what it was. Historians try to get their hands around what remains constant throughout the constant changes. And while they grapple with the past, the present has already transformed around them.

America is as elusive as it is vast. It is a vibrantly warm, living thing and it continues to grow and change, often in ways that seem to contradict itself. Paradox is part of America too.

But if the historical foundation is a good place to begin your exploration, I submit that there is another entry point that brings you even closer to the elemental foundation of the American Dream, and that is the land itself.

One might say that there is no better starting point for discovering the essence of America than to go to the national parks where some of the most beautiful parts of the landscape are on display in their full splendor. There you are witnessing the natural foundation upon which the American dream was nurtured. The breathtaking natural wonders demonstrate that not only is the American nation constantly renewing itself, but so is the land itself.

Observing a glacier in Alaska inspired John Muir to write: “And here … one learns that the world, though made, is yet being made; that this is still the morning of creation; that mountains long conceived are now being born, channels traced for coming rivers, basins hollowed for lakes…”

Surely this is the true heart of the American dream.

As Ken Burns and Dayton Duncan pointed out in the film series “The National Parks,” the idea of setting aside the greatest natural settings for the people as a whole, not for just an elite group of the royal or rich, was a radical idea that was brought to the world first in America. It is the physical underpinning of the idea of American democracy, a country of the people, for the people and by the people.

Don’t miss seeing some of America’s great National Parks in your lifetime. I guarantee you will be glad you went.

Until our next meeting I bid you adieu. 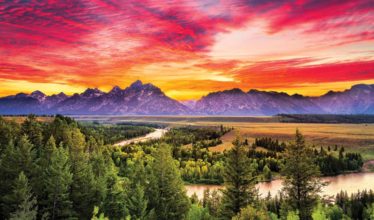