Costa Rica is where you can experience supernature. When I first set foot in Costa Rica it was almost a shock. Life seemed to be bursting out all over, coming at me from everywhere I looked. It felt like an encounter with the life force in its most concentrated form.

I have heard many places referred to as “God’s Country,” but no place deserves the title more than Costa Rica. It is one of the most richly endowed places on earth.

The Hindus have a word, prana, for the fundamental life force. The French philosopher Henri Bergson talked about elan vital. But whatever you call it, in Costa Rica you can observe it vividly. You cannot fail to appreciate it. It will not allow you to ignore it.

With a land area of 19,000 square miles, Costa Rica is only four fifths the size of West Virginia, less than one percent of the land area of the Continental US, but with more biodiversity, 500,000 animal species versus 100,000.

It has only three tenths of one percent (0.03 percent) of the world’s land mass but 6 percent of its biodiversity. Those are just numbers but the effect is that when you are there you experience a dazzling abundance of plant and animal species. 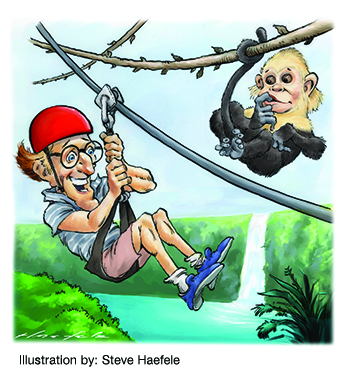 The tiny Central American country packs an amazing combination of wonderful things into its small area. It has tropical beaches on its Pacific coast and its Caribbean coast, and you can drive from one coast to the other in about six hours. In between there are mountains, jungles, volcanoes and serene cloudforests where some of the world’s favorite coffee comes from.

It’s next to Panama at the narrowest part of the Central American isthmus, that tiny, winding strip that is the only land bridge between the mighty continents of North and South America.

Situated between 8 and 11 degrees north in latitude, the country is within the tropics, but it has five distinct climate types and many microclimates within them.

Its climate zones are:

The Central Valley, “eternal spring,” temperatures from 59 to 86 degrees Fahrenheit;

The Highlands, most varied temperatures, sometimes dropping to freezing, but always moist;

The Caribbean Coast, tropical and moist;

The Central Pacific Coast, similar to the Caribbean zone, tropical and moist;

Add to this the fact that Costa Rica has many volcanoes, at least six active. With so much variety of all kinds Costa Rica is a place where it is possible to see a great deal without having to travel very far.

One way to understand Costa Rica’s uniqueness is to look from the standpoint of plate tectonics, that branch of science that observes the movement of giant plates that float around the surface of the earth over vast stretches of time.

Costa Rica sits at the crossroads between two oceans and two continents. It owes its existence to the fact that it is on the edge where the Cocos Plate on the Pacific side jams into the Caribbean Plate on the eastern side.

The pressure between opposed forces over millions of years created a chain of underwater volcanoes. Their eruptions eventually produced enough accumulated lava to reach the surface of the ocean and turn them into a chain of volcanic islands.

Continued eruptions eventually filled in the space between the volcanoes, and by about 3 million years ago they had solidified into a land bridge. That made it possible for animal and plant species to migrate back and forth between the North and South American continents.

Those migrations contributed to the extreme biodiversity in Costa Rica today. Another factor was that the country was in the tropics during the last Ice Age, so many species that would have been wiped our further north were able to survive. A third factor is the fertility of the volcanic soil.

For me, traveling into Costa Rica from the monochromatic northern winter was something like the scene in the movie “The Wizard of Oz” where it changes from black and white to color. It was like splashing into a Disney cartoon fantasy, a surreal super environment where nature speaks in thunderous and joyous tones and adorns itself in splashes of the deepest, brightest colors.

That initial breathtaking encounter created a radical change in my orientation and I was instantaneously immersed in a new exuberant reality. It was like a kind of euphoria that I became accustomed to while I was there. It wasn’t till I got back home that I could fully appreciated the intensity of what I experienced.

For a northerner, being in Costa Rica is something like those rare spring days when the weather conditions are so perfectly supportive to life that it is a pleasure just to be alive.

Some of the animals you encounter in Costa Rica are so amazing it’s hard to believe such things could exist.

I saw many species of parrots, including the scarlet macaws, which are bright red with yellow and blue patches that seem too bright and flamboyant to be natural. Some of the frogs, too, such as the red-eyed tree frog, the strawberry poison dart frog, or the bluejeans frog, are so brightly colored it’s hard to imagine any Darwinian survival factor that could produce such extravagant beauty.

Crocodiles grow up to 25 feet in length. Sea turtles are six feet in length and 1,000 pounds in weight. There are capuchin, spider and howler monkeys, iguanas, margay cats, and countless varieties of flagrantly colorful butterflies, such as the blue morphos, with iridescent, delicate velvet wings.

“They do not labor or spin, yet I tell you that not even Solomon in all his glory was adorned like one of these.”

The hummingbirds are mesmerizing. While bumblebees bounce around in flight, butterflies flutter by, and even wasps have a bit of careening in their flight patterns, hummingbirds are the absolute aces of flight. They have total freedom of movement in three dimensions with hair-trigger accuracy. They come in a wide range of sizes and colors and they hover with a precision that is unmatched by any flying thing I have ever seen.

While the hummingbirds function on a timescale many times faster than humans, the sloth moves in such slow motion it’s hard to recognize it as movement.

Things to Do in Costa Rica

There’s so much to do in Costa Rica that the most difficult thing is making choices. You can enjoy the beaches, the national parks and reserves, the coffee plantations in the cloudforests, the volcanoes. You can go hiking, whitewater rafting, ziplining among the mountaintops or do a wine-tasting. You can take in the history, architecture and museums of its capital city, San Jose, a Spanish colonial city with a population of more than 300,000 in the city limits and more than 2 million in the metropolitan area.

Costa Rica has 28 national parks. Some of the best include Manual Antonio National Park and Tortuguero, and there are wonderful protected areas that are not national parks, such as Sarapiqui rainforest, and Monteverde Rainforest Reserve.

One of the best things about Costa Rica is what may be grouped under the category of Pura Vida, a phrase that means “Pure Life.”

The people of Costa Rica have for a long time recognized the unique value of the country’s natural gifts and have enacted some of the most eco-friendly laws in the world to protect the natural beauty of the country.

It seems the country realized long ago that its natural attributes would become increasingly rare and precious in time, and that protecting the environment would pay off in tourism dollars.

A full 25 percent of the country’s land is protected. Most of its electricity is hydro-electric. The water is healthy and safe to drink all over the country.

I appreciate those things. At a time when the world is facing unprecedented environmental problems, I am grateful to people who are taking positive steps to protect the most wonderful and endangered things on our planet. I admire a culture that holds those values, and I want to go there, meet those people and learn from them. 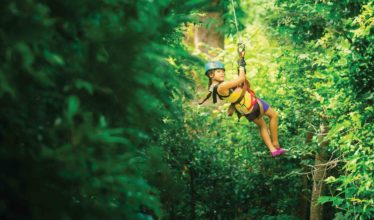