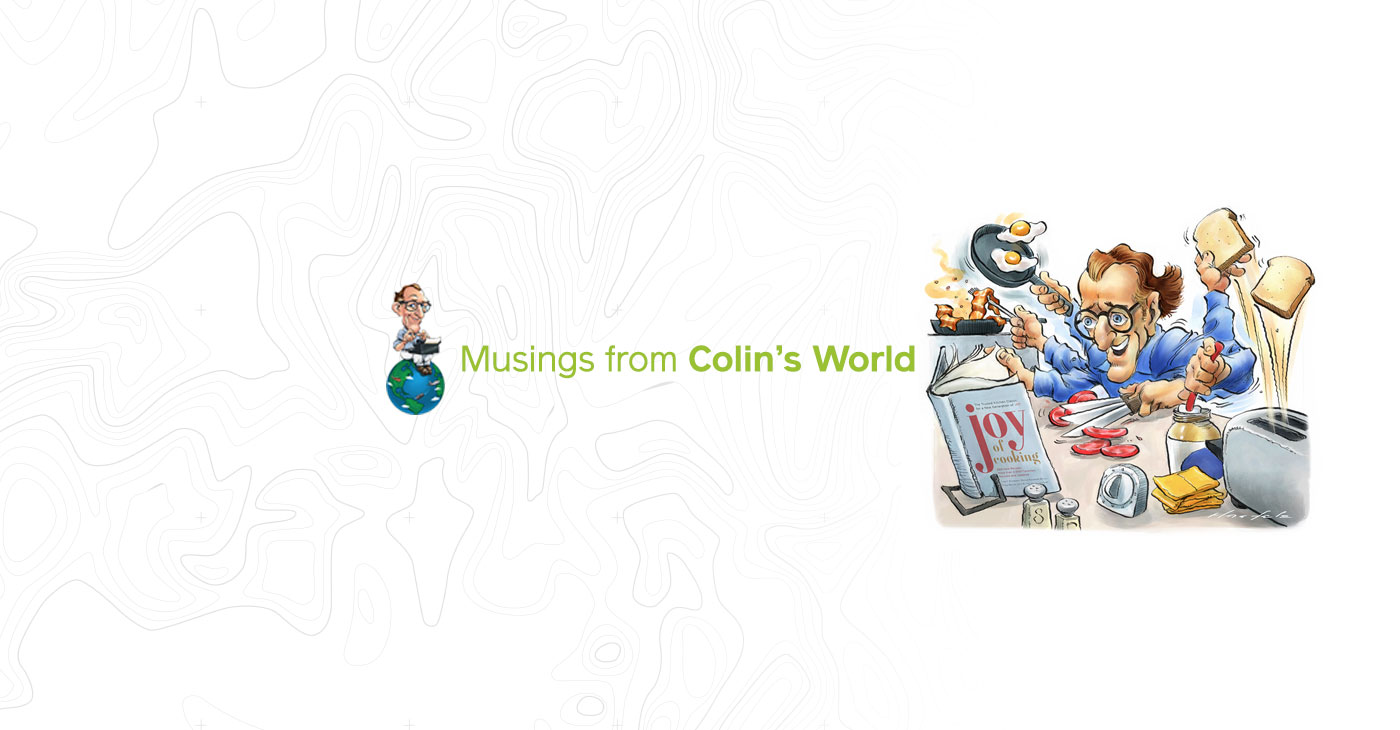 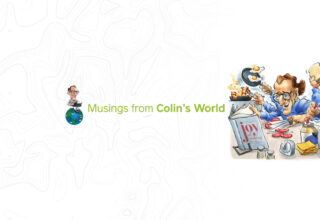 Practicing an art, no matter how well or badly, is a way to make your soul grow, for heaven’s sake. Sing in the shower. Dance to the radio. Tell stories. Write a poem to a friend, even a lousy poem. Do it as well as you possibly can. You will get an enormous reward. You will have created something.

It occurred to me the other day that I never so much as crack an egg anymore without remembering my cooking classes. Not that I’m a trained chef, far from it. I’m not even an untrained chef. I’m a non-cook who can manage to procure something to eat, but not much beyond the most basic nutritional requirements. But I have participated in a number of cooking classes while on tour. And now when I cook, those memories are part of my thought processes, part of the way I experience cooking.

I didn’t join those classes with any expectation, or serious intent of becoming anything more than primitive in the kitchen, as I have always been. I was just participating in a tour activity, somewhat absent-mindedly at that. But I found over time that in spite of my initial indifference, I did actually absorb some things. And now, whenever I am cooking, those memories come back to me. Those experiences have expanded my capacity to think about cooking, and to enjoy it in my day-to-day life. 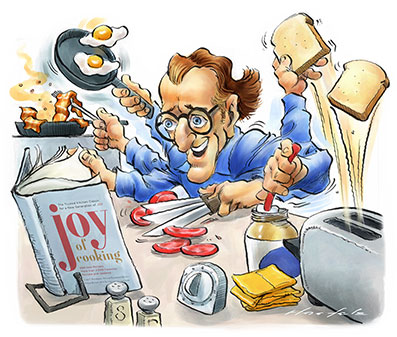 I was resistant at first to participate in cooking classes, not because of disregard for the skills and practices of the art of cooking. On the contrary, I had so much respect for the culinary arts that I shied away from trying to learn about them. It seemed overwhelming, way over my head. It was a language I didn’t understand, a mountain I was not ready to climb.

My style of cooking was more like Mike Hammer, the hardboiled detective in the Mickey Spillane novels, who was far too preoccupied with solving a mystery to pay much attention to what he was eating. He would throw a bunch of stuff in a frying pan, absent-mindedly burn it, and eat it anyway, all the while thinking about something else. That was me.

Whenever I cooked, it was just about sustenance. There was no art, no possibility of it, even on the furthest fringes of my mind.

The Crowded Attic
As to taking on the challenge of improving on my culinary abilities, I didn’t feel like I had any room in my life to take on any new projects or hobbies.

I was like the cranky Sherlock Holmes when his friend Dr. Watson asked whether he knew about the Copernican theories that say that the earth revolves around the sun, etc. Holmes said no, and, “Now that I do know it, I shall do my best to forget it.”

To Holmes the mind is a crowded attic, with only so much room. Anything that didn’t contribute to his work wasn’t worth wasting mental space on. Like Holmes I have conditioned myself over the years to screen out anything I don’t see as “productive,” anything not immediately related to work and business.

But when the enjoyment of cooking started to creep up on me, I realized, it’s not that I don’t have time for it. It was an activity I didn’t have to find time for. Cooking was something I was doing practically on a daily basis anyway. Why not get into it and enjoy it? It was a matter of enriching the time I was already spending on it.

In the age of information overload, it’s true that you have to screen out masses of irrelevant information that distracts you from what you need to do. But carried too far that leads toward narrow-mindedness. Sometimes I need a jolt to push me out of the exclusionary frame of mind. The on-tour cooking classes gently, painlessly nudged me over that threshold, and opened up a new realm of enjoyment of an activity that is already part of my life. It’s one example of how travel is the vitamin that keeps me from settling into rigidity.

Arise Foodies!
I was way behind the curve on the foodie craze. But as cooking classes became more popular and more prevalent, I found myself participating in lessons and tastings in many different parts of the world: Tuscany, Normandy, Jordan, Scotland, South Africa, Prague and many other places. They would focus on the cuisine of the place, and through that lens provide a window on the local culture. They also taught basic lessons about cooking.

A cooking class is a fascinating way to structure a group activity. When people are engaged together in the task of producing a meal, the interactions take place on a very elemental level. It’s hard to think of a more fundamental necessity of human survival than procuring food. So, it’s easy to find common ground there with anyone.

You may have an entirely different career orientation from the person you are working next to, even very different cultures, but when you are cooking together, you have a common frame of reference.

One of the most fascinating things for me about traveling in groups is the way that people engaged in a common endeavor meld together socially and become a tribe. Traveling in groups is one of the oldest human activities. And the same can be said about preparing food. We’re hard-wired to function well in groups. I found cooking together to be one of the most fun kinds of group activities.

Over time, as I found myself attending cooking classes, I discovered that I increasingly enjoyed them. I was seduced by the proverbial “Joy of Cooking.”

It’s an art that shares many qualities with other arts. I love the way cooking is like an orchestration. A lot of it is about timing. It almost always requires preparing two or more items at the same time, and trying to bring all the different processes to their culminations at once, so one part of the meal isn’t cold when others are ready to serve.

Even with my standard breakfast item, a fried egg/cheese/bacon/tomato sandwich, there are several elements. They need to be prepared separately, in a certain order, then combined. I enjoy swinging from one part of the operation to the next, like a conductor.

Cooking is chemistry. When I was in grade school, I liked to pretend I was a scientist. My mother let me use our tool shed as my laboratory. It had zero scientific value but it was a fun game of “let’s pretend.”

But when you are cooking you really are doing chemistry, mixing ingredients, applying heat to them, watching them transform. I can play out my fantasies of being the mad scientist and get the satisfaction of actually producing something worth eating, maybe even delicious.

I have been changed by my cooking classes. It was not a startling change that anyone would have noticed. It was more inward. It changed my relationship to food and eating, to the preparation of food.

The increased enjoyment I got from what had been a daily chore helped me to understand that you don’t always have to monetize something for it to be worthwhile. It’s one of thousands of things I am grateful to have been exposed to through traveling.

I love that quote from Oliver Wendell Holmes, Jr.: “A mind that is stretched by a new experience can never go back to its old dimensions.”

I find it to be true over and over in traveling. The cooking classes, along with so many other travel experiences, have expanded my capacities for enjoyment.

My cooking skills are still about as meager as ever, but my enjoyment! That’s what increased. And that is really worth something.