Contemplation is about seeing, but a kind of seeing that is much more than mere looking because it also includes recognizing and thus appreciating. The contemplative mind does not tell us what to see, but teaches us how to see what we behold.

A few years ago I took a river cruise down China’s Yangtze River from Chongqing to Wuhan. Nearly all the river cruise operators of Yangtze River Cruises followed the same formula in promoting their trips: Yangtze River Three Gorges Cruise! People came from all over the world to experience them. So the day the riverboat passed through the Three Gorges was a climax. It was the day we would encounter the attraction that had been used to draw people into the trip.

Our program directors warned us that we would have to be alert because we would arrive at largest of the gorges, the Xi Ling Gorge, at dawn, and the passage through the Three Gorges would only last about 20 minutes. If we weren’t ready and positioned with a good view we might miss them entirely.

So I got out on deck at the appointed time, found myself a place to stand and prepared for the big event. Others took positions around me. Moments seemed to stretch out as we stood in anticipation of the Three Gorges. We would be there in a minute. It was a misty morning and as the river vessel cut through the mist it was icy wind on my face.

As we approached the gorge, the passage narrowed and the water sped up as it rushed through in a downward direction. It would happen fast now. The scenery was breathtaking, beyond description. Two rows of hills were visible. The nearer one was green, ornately terraced with tiny houses along the shoreline. Behind them were gigantic rocky cliffs, towering almost vertically into the mist. The craggy reddish rock was ornamented with mossy green vegetation and angular branches that had carved out little zones of survivability in the rock face. 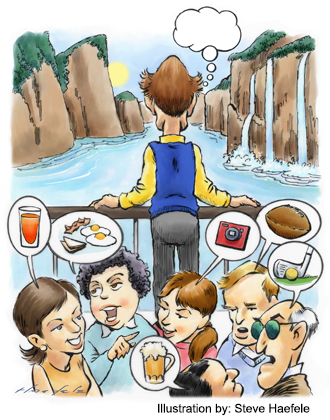 I seemed to see faces on the rocky cliffs. They projected a sense of conscious presence, as if these mountains were ancient beings observing us casually as we passed in our brief flicker of time, while they remained unmoved for geological eons.

Cicadas broke into choruses of screams that reached periodic crescendos. Tiny insects you couldn’t even see dominated the acoustical landscape. Those of us on deck stood in rapt silence for a minute or two. Then a voice broke the silence.

“Sandra, did you bring your camera?” said the man next to me.

The woman next to him pulled up her purse and started fishing through it, shooting a comment to the woman at her left.

“George never remembers his camera,” said Sandra. “If it wasn’t for me we would never have any pictures from our trips.”

She pulled out a gleaming chrome rectangle and started to hand it to George, pausing when her friend touched her forearm. “Is that the Sony?” she said.

Once the silence was broken, others began to talk. Four ladies that had drawn deck chairs up to the railing at my right were wearying of the breakfasts and felt impelled to air their grievances. One mentioned a drink at the buffet. They all chimed in.

“It’s an artificial orange drink, you know, like Tang.”

“But it’s not like Tang. Tang is good. Tang is tangy. This is just gooey and sugary.”

“You haven’t had Tang? They brought it out when we were kids.”

Soon everyone was carrying on conversations about various things back at the office, or in the home neighborhood or on TV. People were not looking at the surroundings anymore. They were just having routine conversations about the same things they talked about when they were at home conducting their normal affairs.

I looked around and no one was looking at the scenery anymore. They were looking at their companions, talking about all sorts of things, anything and everything but the sights they had traveled so far to see. They had forgotten about the Three Gorges.

I looked at my watch. Only five minutes had passed since we came to the Three Gorges. There were still 15 minutes before the big highlight of the trip would be over. But after five minutes, no one was even looking at them anymore.

It was the strangest thing. I observed, not critically but with a sense of wonder. They paid their passage. They could enjoy the trip however they chose. It wasn’t a class. There wasn’t going to be a test. If they wanted to spend their time at the Three Gorges talking about a TV show back home, it was their prerogative.

I don’t exclude myself from this. I’m as guilty as anyone. But in the presence of such colossal, breathtaking beauty, the gap between our actual surroundings and the conscious presence of this boatload of people was particularly striking.

What was the point of coming all this way to see something, and then when you get there, to not pay attention? I wondered. Do we, chattering primates that we are, have the capacity to enjoy and fully appreciate the sublime things we pay so much money and take so much trouble to experience?

The cicadas scream. The primates chatter. I wonder if the cicadas appreciate the Three Gorges.

This may seem to be taking a cynical tone, but my answer to the question is yes. I think we do have that capacity.

Of course we are mortal beings with limited capacity to comprehend the infinite. We have to keep our noses to the grindstone, keep the wheels turning. We can’t go through life in a dream, now can we?

But at the same time I do believe we can stretch our capacities to experience the profound mysteries. Prophets have shown us the way by their examples: Buddha, Jesus, Moses and others. These teachers have shown us that there are ways for human beings to stretch our capacities for appreciation of the wonders of the universe. So while our bodies may be closer in scale to the cicadas, our souls can somehow reach up to those glorious mountain peaks we gaze at.

The spiritual teachers encourage us to quiet our minds, and they offer various ways of achieving quietude, through discipline, focus, meditation, contemplation. There are many ways to get to it, but they all begin with quieting what Buddha called “the monkey mind.”

Meditation may be closing the eyes, repeating a mantra to help focus the mind and filter out noise and distractions. But meditation can also be with the eyes open, while engaged in activity.

Zen Buddhist D.T. Suzuki said, “One of the most significant features we notice in the practice of archery, and in fact of all the arts as they are studied in Japan … is that they are not intended for utilitarian purposes alone or for purely aesthetic enjoyments, but are meant to train the mind; indeed, to bring it into contact with the ultimate reality.”

All the various spiritual paths begin with learning to be fully present in the now.

Travel presents a unique opportunity to practice that kind of presence in the moment, in the presence of a miracle. Once you fully experience the sublime wonder of a great work of nature it can lead you to seeing the wonder that is present at every place in every moment. As above, so below.

So I encourage you to try that. I will do the same. 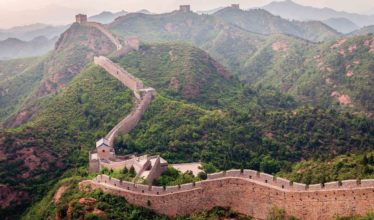