Bad News – Turn It Off

The news ain’t what it used to be back in the day when Americans turned on the 6 o’clock news and there was Walter Cronkite, “the most trusted man in America,” to give them an overview of the important news events of the day. He closed the hour with “and that’s the way it is…” and sent you off to enjoy your evening, perhaps a little bit reassured that although there was no shortage of bad news in the world, you could probably put your concerns to rest until the next day.

In those days the Federal Communications Commission had a rule called the Fairness Doctrine that required those who held licenses to broadcast over the public airwaves to present controversial matters of importance in a manner that was honest, equitable and balanced.

The underlying principle was that the public airwaves belonged to the people. The finite band of broadcast frequencies is part of the commons, like the rivers and the oceans. No one owns them exclusively. They belong to all of us. The FCC was designated to regulate their usage to make sure they were being used responsibly and in a way that benefitted the public at large.

The Fairness Doctrine was eliminated in 1987 and from that point forward all broadcasters have had to concern themselves with is making money.

In the old days news was based on the network fulfilling its requirement to provide public service in exchange for the privilege of having a license to use part of the broadcast spectrum. Today the news is strictly business. 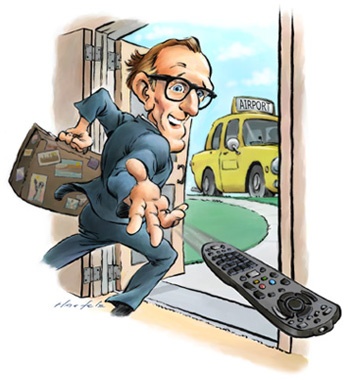 Today’s news is not distinguished from entertainment. It is there to draw viewers. The more viewers, the higher advertising rates and the more money the network can make. Any concerns over journalistic integrity are applicable only to the extent that they affect viewership. If viewers believe the product does not have integrity, they may turn away, viewership will decline and ad revenues will decline. It all comes down to ratings.

Today’s news plays all day and all night. But there is a limit to how much you can healthily absorb. Like most things it has a maximum dosage. After that it becomes toxic. And that is when it is time to turn it off.

Most news is negative

The networks get the most viewers when people are afraid. So it serves their purposes to keep you on edge. The more afraid you are, the more you stay glued to the tube to watch for the next development. The more “breaking news” banners they flash, the more of your attention they can hope to get.

Some of the news is downright terrifying. After the horrific events of 9/11 there were days and days on end of scenes of horror played over and over on TV. Americans were hypnotized by terror, and pushed into a fearful, anxious state. But the news networks never did better. They get more viewers when people are afraid, so you can’t blame them if they never miss a chance to stir up hysteria and fear. It’s good for business.

It’s not their fault. This is what we respond to. The fact is that negative news draws more viewers. “If it bleeds it leads,” they used to say, and it is still true. People are more drawn to negative news.

So there is more negative news than positive news. If you aren’t convinced of this by casual observation, you can find plenty of studies via Google to confirm it. Bad news stories outnumber good news by as much as 17 to one. It’s not even close.

It’s not that we prefer to hear about murder, war and disasters. It is because of a basic principle of survival. Going back to our earliest evolutionary states, we are conditioned to watch out for danger. Any change in the environment could be a sign of danger, and we must be alert to danger. In a moment of inattention, we could be attacked and killed by a lion or bear, or perhaps a truck. So our basic instincts keep us alert to danger. And that is a good thing. It can save our lives. Anything that sounds as if it may be a threat catches our attention, for good reason.

Magazine sales increase by 30 percent when the cover is negative, versus when it is positive. Research has shown that even when people say they want more positive news, they still click on more negative stories when they are browsing the Web.

When we seek to be responsible, well-informed citizens, aware of what we need to be concerned about in the world, we keep an eye on the news for anything that might produce a threat. This is especially true in times when there is a lot to be legitimately concerned about. But our ancient conditioned behavior in responding to threats can work against our well being. It can cause us to project the horror of the real catastrophes onto the smaller problems of our own lives. It’s called catastrophizing when we spend so much time focused on our worries that our problems appear bigger to us than they objectively are.

Negative news can affect mood and even performance

Paul Solomon on the Jim Lehrer News Hour talked about how consumer pessimism leads to holding back on spending, which then can cascade into an actual economic recession. He also said the too much exposure to negative news can push people into a state of depression and emotional upset that can affect decision-making capacity. You don’t make good decisions when your emotional state is off balance. This can turn a bad mood into a real problem.

Taking in too much negativity can hurt you emotionally, physically and it can affect performance. I know this by observing myself. But it is also well established by research.

In 2012 the Harvard Business Review conducted research that showed that just three minutes a day of absorbing negative news in the morning can affect “the entire emotional trajectory of your day.”

In 2015 the publication did a follow-up study on the longer term effects of negative news on well being and performance. They had two experimental groups of people, one of which was exposed to three minutes of negative news, the other to “solutions-focused” news. These weren’t just superficial feel-good stories, but stories of human resourcefulness in the face of problems that emphasized the principle that one’s behavior can make a difference.

Six hours later both groups were asked to respond to a questionnaire and 27 percent more of those who had watched the three minutes of negative news said their day was “unhappy.”

HBR continued the inquiry, discovering that most news stories were about events that were beyond the reach of nearly every individual, such as a drop in the stock market or a terrorist attack. When we are constantly exposed to negative stories about things we can do nothing about, it conditions us into a state of what is called “learned helplessness,” which has an obvious correlation with apathy, depression and low performance.

So it is up to us to ration our intake of bad news. No one else is going to do it for us. This is just that way things are. We have to take than initiative for ourselves.

There’s a positive angle here too. Social media users circulate more positive stories than negative ones. So if we are getting our news through other people, we may see a more positive bias.

Bottom line, what is your antidote to all this bad news? A certain amount of it is inevitable, even necessary as you participate as an informed citizen. But it is worthwhile to try to balance it, to recognize the dangers of bad news and to limit it.

The antidote to bad news is turning off the news and interacting with the real world around you. There is usually a much lower frequency of bad news stories in your encounters with real life in your neighborhood or at your work place.

This brings us back, not surprisingly, to travel, the best antidote to bad news. When you are traveling you are constantly exposed to new and enriching things. Much more of it will be positive than negative, and what negative experiences you do have tend to be relatively minor, such as missing a plane or other such mishaps. Not fun, but not life-threatening. Tiring perhaps, but not spirit killing.

When I am traveling I am so busy, I am taking in so much positive stimulation, that I don’t have time to obsess on the news. I can keep in touch. I can go online periodically. I can pick up a newspaper, listen to the radio. But those experiences will be a relatively small part of my overall travel experience. And when I slow down in my travel activities enough to take a look at that level of human affairs, it is in a manageable proportion to the rest of my day’s experience.

Ironically, bad news sometimes makes people afraid even to travel, to even leave their homes. But obviously that is a downward spiral, a cycle of negativity you do not want to take hold.

So get up off that couch! Turn off the TV and get back into the swing to life. Travel and see the world while you still can.

I hope to see you out there!