You can have an adventure anywhere. But Alaska IS adventure. In the case of Alaska, the two terms cannot be separated. I suppose there are places where you can be bored if you are so inclined, though I would consider that my own failure of imagination. But you can’t go to Alaska and not have an adventure.

Just seeing the epic Alaskan landscape is an adventure. It rouses the adventure that is in you and is your birthright.

Alaska is truly unique, in a class by itself. Geographically it is set off on its own, a giant wilderness peninsula off North America, at a far edge, remote from most of the rest of the continent.

Hundreds of millions of years ago, when the continents we know today were bouncing around in the global dance of continental drift, Alaska grew by acquisition of many smaller landmasses that drifted into it. As the continents twisted and turned, at one point Alaska was the North Pole of the planet. In another era it was equatorial and tropical. 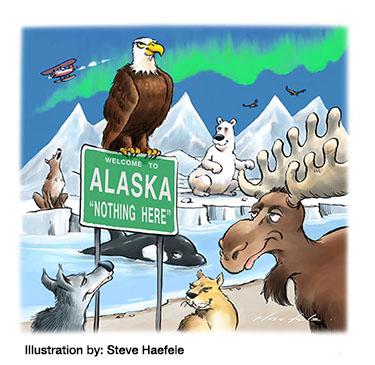 Alaska today is a conglomerate of the many smaller landmasses that collided with its core and joined the larger mass. The force of the collisions pushed up mighty mountain ranges and made Alaska one of the most mountainous places on earth.

Reasons to Go to Alaska

When you haven’t been to a place you can be forgiven for wondering why anybody would go there. For some of the uninitiated the mention of Alaska draws a blank. Why would you go there? What is there?

If your map emphasizes cities and roads, the trappings of civilization, then Alaska may well appear to be a whole lot of nothing.

Seen from that point of view, Alaska may not get onto the bucket lists of some people. But Alaska more than makes up for whatever it lacks. People don’t go to Alaska for the same reasons they go to those other places. Alaska offers a rarified kind of adventure.

When you travel into the frontier for adventure, you can’t go with the same expectations as when you travel to more developed destinations. You don’t go to Alaska to be coddled in five-star luxury. Alaska is adventure, and that’s its attraction. If I traveled to Alaska and ended up in a super luxury hotel that insulated me from my surroundings, I would ironically feel that I had cheated myself out of the real experience.

Alaska is by far the least densely populated state in the U.S. with thousands of square miles that are virtually uninhabited. In that sense there is some truth in the assertion that there is “nothing there.” However, to understand the attractions of a place as unusual as Alaska, the criteria for evaluation of a tourist destination must be adjusted.

Probably the simplest way to adjust your tourist destination rating system to accommodate Alaska would be to simply invert it. When you consider the things you find in cities and beach tourist areas, it is because of their absence that you go to Alaska. Alaska is where the suburbs have not taken over the wilderness, where nature still rules, sometimes with a harsh hand. In Alaska you see nature in its most staggering beauty, and on the most colossal scale.

Where Life is Still Wild

Why do people go? It’s adventure. It’s wilderness, one of the greatest wilderness areas in the world, and it’s technically in the United States.

Alaska is truly the Great Outdoors. It’s an America largely free of commercialism and overdevelopment. You go there to find out what nature is like without being cluttered and wrestled into unrecognizability by human intrusion.

The vastness of Alaska almost defies comprehension. A third of Alaska is above the Arctic Circle. The state measures 1400 miles from north to south, more than the distance from New York to Havana. If Alaska were a country, it would be the 33rd largest in the world, between Nigeria and Venezuela. It is larger than the next three largest states put together: Texas, California, and Montana.

Alaska is one-fifth the size of the entire Lower 48 states. It is home to 54 of the 84 million acres set aside in the National Park system, nearly two-thirds of all National Park land.

Surprisingly, one component of Alaska is its Russian history. It was from Russia that the United State purchased Alaska.

Russian history in Alaska dates to 1725 when Peter the Great sent Vitus Bering to explore the North Pacific. In 1741 Bering’s naturalist Georg Steller, went ashore on Kayak Island and became the first European known to set foot on Alaska.

The Russians established their first permanent settlement in Alaska in 1784 on Kodiak Island at Three Saint’s Bay. In 1799 Alexander Baranov established the Russian now known as Old Sitka, which is a favorite site for tourists today.

Russia controlled most of what is now Alaska until 1867, when the territory was purchased by U.S. Secretary of State William Seward for $7.2 million, about two cents an acre. During World War II, the Japanese occupied two Alaskan islands, Attu and Kiska, for 15 months.

Alaska is one of the few places where the wildlife rivals that of Africa. Besides bears from polar bears to grizzlies, there are giant moose, caribou, wolves, coyotes, lynxes, bald eagles, a great profusion of bird life, and the largest animals on earth, the whales.

Alaska is a land of mountains, some of the greatest in the world. The tallest mountain in North America is in Alaska, Denali, once known as Mount McKinley. The Alaska range, the Aleutian range and the Rockies all run into each other there, creating a very rugged intersection of massive geological forces. Many of the landscapes in Alaska can bring the heart to a standstill.

Alaska has some of the greatest glaciers on the planet. Some of the more spectacular ones that can be visited are Byron Glacier, Matanuska Glacier, Mendenhall Glacier and Exit Glacier.

It was observing a glacier in Alaska that inspired John Muir to write: “Standing here, with facts so fresh and telling and held up so vividly before us, every seeing observer, not to say geologist, must readily apprehend the earth-sculpturing, landscape-making action of flowing ice. And here, too, one learns that the world, though made, is yet being made; that this is still the morning of creation; that mountains long conceived are now being born, channels traced for coming rivers, basins hollowed for lakes…”

City life is never the sole reason anyone travels to Alaska, but Alaska cities are uniquely Alaskan. They are inheritors of the wild culture of the frontier and the Gold Rush.

The Tongass is the world’s largest temperate rainforest and the second largest rainforest after the Amazon. It is one of those remaining wonders of the world where you can see something of what life has been like for thousands of years.

Alaska has six months when the sun barely shows above the horizon, if at all. But it also has a similar period in the summer with almost constant sunlight. These contrasts increase as you travel northward. The swings between summer and winter light are so wide that the changes of season take place at great velocity.

With 24 fault lines in Alaska, it’s one of the most volcanic areas in the world, and there are many hot springs including many you can visit, such as Chena Hot Spring, White Sulphur Springs on Chichagof Island, and Baranof Warm Springs.

There are countless other points of interest in Alaska, any of which would be worthy of a great deal of attention in themselves, including historical mining communities, fishing, skiing, snowboarding, sled dogs, icebergs, and the Northern Lights.