To Rome, With Love… 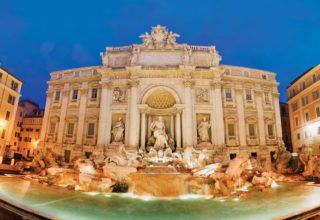 You might think this post refers to the latest Woody Allen movie, but it actually refers to a very old TV show of the same title I used to watch as a child. It was a show about a father (John Forsythe) who took his daughters to Rome to live… I remember scenes of the kids playing ball in the cobblestoned streets in the center of this ancient city and it all seemed so intriguing. Little did I know that I would end up living in Rome for five years in my 20’s.  A one-way ticket to London and a Eurorail pass brought me there originally for a year of European exploration, but when I got to Rome, I just could not leave the allure of the eternal city. And in all those years (and on many subsequent visits as Tauck’s former Tour Architect for Italy where I planned various Rome tours), there were sites I had not seen on Tauck’s Roman Holiday event, named after the 1953 film of the same name that introduced Audrey Hepburn to the world.

There is more to the story from living in Rome to creating events for Tauck’s newest brand.  But in October 2010, after a hiatus to raise my young children, I returned to Tauck celebrating its 85th anniversary at our first Roman Holiday event, highlighted by a private dinner inside the Vatican Museums.  Vatican City, or Stato della Città del Vaticano, home to St. Peter’s Basilica, and the Vatican Museums, is the Pope’s, or Bishop of Rome’s official residence which boasts a population of a mere 1,000 inhabitants and is a UNESCO World Heritage Site in its entirety!  The first official residence of the Bishops of Rome was not in its current location, but in the Lateran Palace, at St. John’s in the Lateran, which we visit on our daytime Roman Holiday sightseeing track, “Caput Mundi” (literally Latin for “Head of the World”) showcasing the early middle ages. We’ll see many layers of Rome, and by special permission granted by officials from inside the Vatican we are able to visit the Basilica’s underground excavations including the original Roman neighborhood and Emperor Constantine’s first altar, as early Christian Rome was formed.  St. Peter’s was really out of the way then, which is hard to believe as Vatican City is an integral part of Rome today.

I had been inside the Vatican Museums dozens of times before… and it was always incredibly crowded.  So on the Roman Holiday event, not only do we see the artistic treasures privately at night, as Tauck does on our Italy tours, but we have the extraordinary afterhours dinner privilege.  To stay after closing, and then to remain for dinner in the Braccio Nuovo (literally “new arm,” meaning new wing), filled with an amazing 200+ ancient Roman sculptures, is a once-in-a-lifetime experience. The initial reference to a Vatican art collection was a library founded by Pope Sixtus IV in 1475, so our dinner location in the Braccio Nuovo, inaugurated in 1822, is indeed quite new!  When I told my Roman friends I was coming back to have dinner in the Vatican Museums working this event, their reaction was “Cosa?” “Ma scusa, che cosa hai detto?” “Scherzi?” … “What?” “Excuse me, what did you say?” “Are you joking?”

And I was not. With these friends, I spent many museum visits shoulder to shoulder trying to catch a glimpse of Raphael’s magnificent frescoes in the Stanza della Segnatura (Signature Room) of the apartments commissioned by Pope Julius II for his personal office in the early 16th century.  Raphael’s masterpiece, “The School of Athens,” painted around 1510, depicts extraordinary philosophers of Ancient Greece such as Aristotle and Plato, but with portraits of famous artists of the painter’s time like Leonardo da Vinci, Michelangelo and even Raphael himself!  I made many attempts to see these portraits, only comparing it to a bad seat in a sold-out theatre straining to see between several large heads, always leaving frustrated.  And now to enter the “stanza” with just our small group, the whole fresco was before us to truly appreciate! To imagine that Michelangelo was just around the corner at the same time painting the ceiling in the Sistine Chapel was incredible. How lucky we are today that these brilliant Renaissance geniuses were commissioned to create such amazing works of art. We explore many of them on another daytime sightseeing track on Roman Holiday, called “Geniuses of Rome,” and again by special permission, enjoy a walking tour of the Giardini Vaticani (Vatican Gardens), started when the Popes moved from the Lateran Palace to Vatican Hill. The current gardens encompass almost 57 acres of the total 110-acre Vatican City State! What a treat to see yet another exclusive area as we tour inside the  Vatican, replete with magnificent fountains and orchards, used for centuries for quiet meditation.

On our evening visit, after seeing Raphael’s self-portrait up close, we stroll into the most famous of chapels, the Cappella Sistina (Sistine Chapel), for an unhurried view of Michelangelo’s ceiling restored in all its glory. We can take in its brilliant colors and forms from all angles and walk freely from end to end without bumping into anyone! With friends, I used to hang out just outside in the nearby Cortile della Pigna (Courtyard of the Pinecone) as a reprieve from the crowds.  Its funny name comes from an enormous ancient bronze pinecone; but on the Roman Holiday event, it is the setting of Tauck’s lovely private cocktail party prior to dinner.  And being there with Michelangelo’s magnificent St. Peter’s dome lit up in the background, I could not help thinking I was part of a movie set or a TV show at least… not the everyday life depicted so well by John Forsythe in “To Rome, With Love,” but perhaps a scene that could have been part of Princess Ann’s exclusive world from the film “Roman Holiday”… 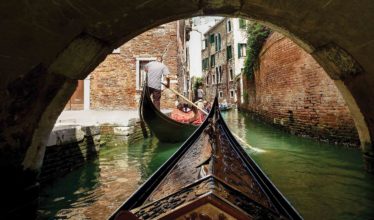 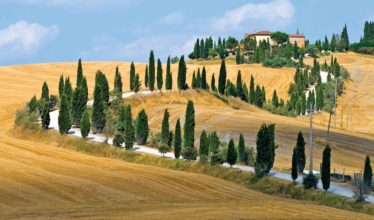