What’s So Baltic about the Baltic Sea?

Funny how sometimes when you have few associations with a word it brings to mind no pictures or sensations. It’s like that for me with places. Before I have been to a place its name is sometimes little more than just a word. It’s not until I actually experience a place that I realize how impoverished my preconceptions of it were. The word “Baltic” was like that for me.

My earliest recollection of the word is from playing Monopoly. Baltic Avenue, with its purple banner, was one of the least desirable properties, very low rent. I couldn’t have told you the difference between the Baltics and the Balkans, though they are at opposite ends of Europe.

The word “Baltic” sounded to me like an adjective, like “rustic” or “eccentric” or Balsamic. So what is so Baltic about the Baltic Sea anyway?

My understanding took a leap forward when I realized that the Baltic Sea had been the highway for the Vikings in their explorations of the world half a millennium before Columbus.

Yes! The Vikings! Those rugged, intrepid explorers that braved the seas in their furry horned hats! Leif Erikson, son of Erik the Red, sailed to a mysterious land he called Vinland, 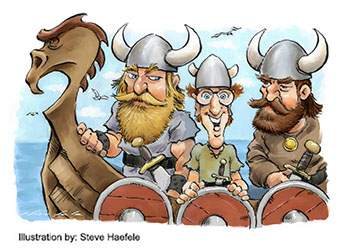 which was named Newfoundland nearly 500 years later by John Cabot when he claimed it for England.

Now there’s a story to stir the imagination of a landlocked Midwesterner! Today the land of the Vikings is known as Denmark, Norway and Sweden. The Baltic Sea extends for a thousand miles from southern Denmark almost to the Arctic Circle, and eastward to the Gulf of Finland and Russia. It separates the Scandinavian Peninsula from the rest of continental Europe.

Gradually I came to understand that the Baltic Sea was as vibrant a part of human history as the Mediterranean, which mirrors it at the south of Europe. In the Middle Ages, from the 14th to the 16th centuries, Tallinn, Estonia, was a major trade hub of Northern Europe.

I finally decided it was time to replace my vague notions with actual experience. I signed on for a Baltic cruise on a ship that carried only about 250 passengers. Now that was an adventure!

A small ship cruise is a great experience in itself, independent of any destination: the ease of traveling without having to pack and move, sharing the experience of the earliest explorers, being able to stand on deck and feel the sea breeze on your face, and look out over the great expanse of ocean water extending to the horizon.

But for me, ultimately it’s the destinations that make a trip unique, and in this case it was the countries surrounding the Baltic Sea.

Baltic Centricity
The cruise was designed to explore the Baltics and the civilizations that they gave birth to. It started with two days on land in Stockholm, Sweden. After boarding, we headed for Helsinki, Finland, for a day tour, followed by three nights docked on the River Neva in St. Petersburg, Russia. Then we visited Tallinn, Estonia, for a day, had a day at sea, and finally went back on land with two days in Copenhagen, Denmark. It was a delicious menu.

I sailed in May, about a month before the summer solstice, and I am glad I chose that time of year. At that time in the north, the days are long. The sun sparkles on the water till late into the night. It rises again a few hours after setting, so early that I found it necessary to keep my blinds drawn when I went to bed so as not to be too rudely awakened.

The long stretches of sunshine enlivens everything and everyone. The onset of darkness that normally triggers the impulse to sleep is delayed until late into the night. You have to remind yourself to go to sleep when midnight feels like late afternoon.

As much as any other country on earth, I suppose, Sweden was built on sea life. Stockholm was founded as a lock between Lake Mälaren and the Baltic Sea and an archipelago of 14 islands. I was told by a guide that nearly every Swede owns a boat or two, and fewer of them have cars.

My trip began with a dinner at the Vasa Museum. It was created to exhibit the wreck of a spectacular and strange ship called the Vasa, an enormous, cumbersome and heavily-armed battleship built to order for the king of Sweden.

On its maiden voyage in 1628, the Vasa sailed 1300 meters, then rolled to one side, weighted down by its gun ports. It was top heavy and when it keeled over, water poured in the gun ports and took the Vasa to the bottom, 30 meters below. It had lasted only 20 minutes.

The Vasa sat on the ocean floor for 333 years. Then in 1961, bolts were put in to hold the Vasa together and it was hauled up from the sea floor and restored. It was a fascinating thing to see, and an intriguing prelude to a sea voyage.

St. Petersburg
The itinerary was built around St. Petersburg as the centerpiece, with more time devoted to than any other stop. And that suited me fine because Russia is irresistible to me. I love its rich culture and dramatic history, its audaciously colorful, onion-domed architecture, its great legacies of literature, music and dance, and its strange, often roguish historical figures. Churchill hit it when he said that Russia is “a riddle wrapped in a mystery inside an enigma.”

In my few days there I managed to get to the astonishingly ornate Church of the Saviour on Spilled Blood, which glistens in the sun like a giant, jewel-encrusted crown. We also got a special pre-opening tour of the Hermitage, where you could spend a very long time and not even walk all its floors. But we got a good, selective glimpse in a few hours.

We had a strange and uniquely Russian experience with a visit to the Yusupov Palace, which rolled up a lot of Russian history in one place. It was the palatial home of a family of Muslim immigrants who amassed more wealth than the emperor, ran some 500 factories, and owned three palaces in St. Petersburg and two in Moscow.

We saw some musical and dance performances in the palace’s private theater and learned grisly details about the assassination that took place there of Rasputin, the strange, mystical character who roiled the Russian crown. Now there is a story!

Another favorite place for me on this tour was Copenhagen. I was able to spend some time in Tivoli Gardens, the granddaddy of theme parks, and to get a taste of life among the “happiest people in the world,” as they have been called for many years running in The World Happiness Report.

Catch me sometimes late at night over drinks and I’ll tell you much, much more. It’s way too much to go into in one article. But I’ll carry those memories for the rest of my life.

And some of those places I definitely want to return to for further exploration.